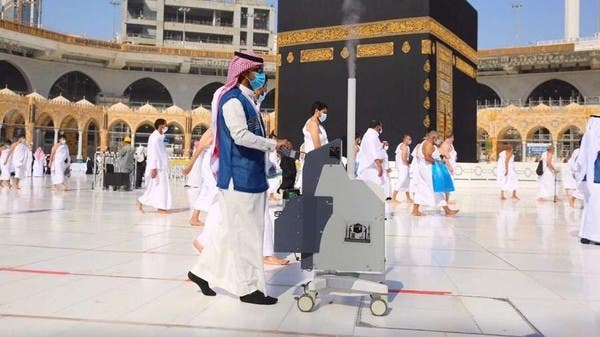 The Agency of the General Presidency for Technical and Service Affairs raised its full readiness, in preparation for receiving the first batches of pilgrims, and the first Tarawih prayers for the blessed month of Ramadan, through an integrated work system that works around the clock, and the agency worked to intensify the disinfection, sterilization and operation operations in addition to distributing Zamzam water bottles of use. The one is responsible for the chapels, areas, squares, and visitors in general, and the agency also supervises transportation and vehicles inside the Grand Mosque, opening the doors of the Grand Mosque, organizing entry and exit from it, and determining the paths for people with special needs.

The agency supervises the processing of the amplifiers, disinfection, sterilization, perfuming, and furnishing with new carpets, cleaning, sterilization and perfuming, placing single-use Zamzam water bottles, and equipping the sound systems of microphones and loudspeakers scattered throughout the old house with specialized technical cadres.

The agency also regulates the squares, and organizes their movement inside the Grand Mosque and its squares through observers distributed over the main and secondary corridors, in order to ensure the success of the process of evacuation, and to fulfill the requirements of precautionary measures and preventive measures, and the agency has also allocated several teams for disinfection and perfuming works distributed in all sides of the Grand Mosque and its facilities So that the Holy Mosque is washed 10 washing, and more than 4000 workers and workers perform it, and in every purification process consumes more than (60 thousand) liters of disinfectants and 1200 liters of perfumes, and the cleansing operations are carried out with the finest types of disinfectant materials that were brought specially to the Grand Mosque.

The sterilization operations are carried out around the clock using approximately (10,000 liters) of sterilizers to sterilize all surfaces and floors in order to create a healthy, devotional atmosphere free from epidemics, and more than (70) field teams are working 24 hours to sterilize all the sides of the Grand Mosque and its external squares. And toilets, with materials that have been carefully selected, especially, and environmentally friendly, for the safety of those visiting the Grand Mosque, and more than 500 automatic hand sterilization devices with a sensor have been distributed.

The agency has also intensified irrigation services for visitors and worshipers by distributing (200) thousand packages that are distributed according to the precautionary measures followed in the Grand Mosque of Zamzam packages of single use through special vehicles numbering about (50) vehicles on the general public, and the prayer halls in general, on the first floor, and in general. The expansion of King Fahd, as well as the expansion of King Abdullah and his squares, and the general entrances and stairs were supported by teams of cylindrical bags, which numbered about (200) cylindrical bags, and other distribution methods used in the Grand Mosque.

The Mobility Services Department has raised its full readiness to serve the visitors of the old house by equipping more than (5000) regular vehicles and about (3000) electric vehicles for those in need of pilgrims and those coming to the Grand Mosque, to facilitate the transportation of worshipers and pilgrims through the mezzanine floor on the first floor of the circumambulation and pursuit by vehicles, which can be accessed. It consists of four entrances to the Grand Mosque, namely: (the “Shabika” entrance via the Shabika Bridge, “Al-Arqam” staircase, and “Al-Marwa” on the roof of the Qashashi courses), with posters placed at the distribution sites emphasizing the application of social distancing and not crowding, when requesting the service, Stickers on the vehicles confirm that the vehicles have been sterilized before and after use.

The agency also recruited more than 100 observers at the doors of the Grand Mosque designated for receiving worshipers and directing them to the places designated for them, and 10 doors were allocated for pilgrims: (King Fahd Gate, Ajyad, Al-Safa, the Prophet, Bani Shaybah, Al-Marwah, Salam Al-Arqam, Bridge Al-Marwah, and the phrase of the Prophet In addition, the process of entering and leaving the worshipers is organized, guiding the worshipers to the places of the prayer halls, and assisting the security men in diverting and directing the worshipers when the prayer halls are full.

Among the most important tasks of the agency is to supervise the follow-up of the operational status of all escalators and elevators, to ensure the readiness of all their parts, and to follow up the operational plan of the operators of stairs and elevators, as the operation and maintenance of these stairs and elevators is supervised by more than 90 engineers and technicians from the national cadres in the Grand Mosque in Mecca and its yards, which Its number is more than (200) escalators and 14 electric elevators, as well as inspecting the sound system consisting of approximately 8000 speakers, 9 microphones for the front, and 6 for the muezzin distributed mainly, reserve and emergency to avoid any malfunction in the audio system.

The agency is also concerned with moderating the air in the squares of the Grand Mosque, using technology (spray cooling) by absorbing thermal energy from outside air, to reduce its temperature. The number of spray fans is about 250 fans distributed over the grounds of the Grand Mosque, with a height of about four meters and a diameter. It reaches 38 inches with an air flow velocity of (1100 CFM) and reaches approximately 10 meters and is operated during prayer times and when the Grand Mosque’s yards are full and the temperature rises.