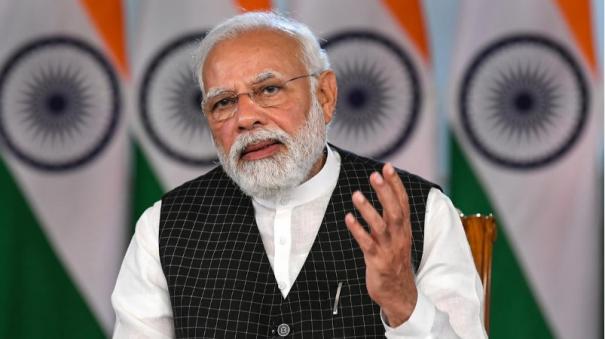 New Delhi: India is proud to chair the G-20 organization. Prime Minister Narendra Modi proudly said that we will take action to guide the world for the betterment.

Prime Minister Modi spoke on the 95th ‘Manadin Vor’ program which was broadcast on radio yesterday. India will assume the presidency of the G-20 organization on December 1. It makes every Indian proud. The G-20 leadership has also presented a huge opportunity to India. Make full use of it. India will guide world welfare, unity and environmental protection.

India follows the principle that the world is one family. With this in mind, we have chosen the theme ‘One Earth, One Family, One Future’ for the G-20 leadership.

All the people of the world should live prosperously. India’s desire is to maintain peace throughout the world. We will strive to fulfill these ambitions during the G-20 presidency. India can solve all the problems facing the world.

Apart from the capital city of Delhi, G-20 summits and events are being held in various parts of the country. Then, you will meet people from different countries. Tell them about the culture and uniqueness of your area.

At this time I make an appeal to the youth. Get involved in some way with the G-20 Summit. G-20 can hold related debates and competitions. School, college and university administrations should conduct such competitions.

On the 18th, a new history was created in the Indian space industry. India’s first private rocket Vikram-S was successfully launched that day. Developed by a space startup company, this rocket has various features. Not only is the weight less, but the cost of production is also very low compared to other countries. After the opening of space to the private sector, the dreams of the youth are beginning to come true.

The satellite jointly developed by India and Bhutan was successfully launched on the 26th. India is also making rapid progress in drone technology. In Himachal Pradesh’s Kinnore, apples were transported by drones. Apples can now be easily transported from the mountainous region of Kinnore to other regions.

Exports of musical instruments from India to foreign countries have increased three-and-a-half times in the last 8 years. Similarly, exports of electronic equipment have increased by 60 times. This shows that the interest in Indian culture and Sangeet is increasing all over the world.

Lidy-Grow-U is an organization created to preserve the lifestyle, art, culture and music of the Naga people in Nagaland and bring it to the next generation. The organization publishes music collections of the Naga people and trains the youth in traditional Nagaland music, dance, weaving, sewing and making bamboo products. Kudos to the Liddy-Grow-U organizers for this.

Jatin Lalit Singh, a resident of Bansa village near Hardoi in Uttar Pradesh, runs a community library there. It has more than 3,000 books on Hindi, English Literature, Computer, Law, competitive exam books. There are also comic books for children. About 40 volunteers are involved in guiding the students.