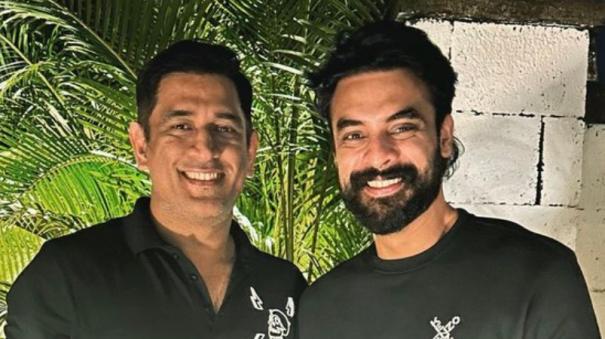 Chennai: Actor Tovino Thomas has met former Indian cricket team captain Mahendra Singh Dhoni. He shared this on his Twitter page. He also said that he had a great time with Dhoni.

Chennai Super Kings captain Dhoni has a very strong fan base. Actor Tovino Thomas is one of them. He is acting mostly in Malayalam language films. He acted in the Tamil film ‘Mari 2’. It was in this environment that he met Dhoni.

“It’s been a really cool time. Spending time with Captain Cool was a great experience. He was the same cool guy we saw on screen in person. We both enjoyed talking a lot. I feel really lucky for this opportunity. A great role model for everyone. Wishing you a smooth and sparkling journey,” said Tovino Thomas. Both were wearing black t-shirts during the meeting.

Dhoni has started a film production company. The company, which runs under the name Dhoni Entertainment, is expected to produce some major films in the coming days.

.. thoughtful things. I feel truly fortunate to have had this opportunity; a great role model for all. Wishing more glitter to your illustrious journey @msdhoni