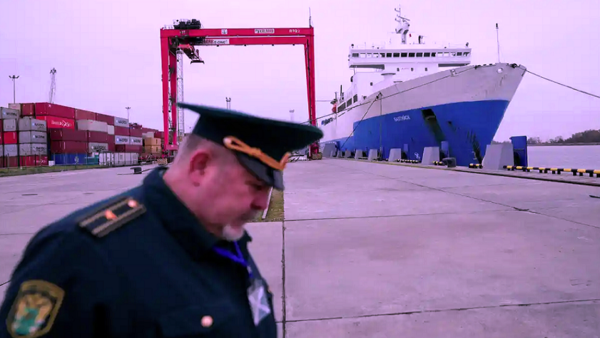 It became clear on Monday evening that Lithuania, a member of NATO and the European Union, prevented Russian railways from passing through its territory to ship coal, minerals, electronics and other sanctioned goods to the Kaliningrad region of Russia, which it can only reach by land through Lithuanian territory, which led to Half of the area’s imports that Moscow retained after the dissolution of the Soviet Union choked off their strategic importance.

The ban angered Moscow strongly, and Lithuania immediately demanded the lifting of the ban, through a statement in which the Russian Foreign Ministry said that if transport links are not fully restored, “Russia reserves the right to take measures to defend its national interests.” Lithuanian Foreign Minister Gabrielius Landsbergis replied that his country is implementing Simply EU sanctions, and that the actions were “taken after consultation with the European Commission, and in accordance with its guidelines,” he said.

The foreign ministers of Lithuania and Ukraine, and a photo of the Kaliningrad site between Poland and Lithuania

In his statement, the Minister also confirmed that “sanctioned goods will no longer be allowed to cross Lithuanian territory.” And quickly, Ukrainian Foreign Minister Dmytro Kuleba joined forces with him by writing a tweet, in which he said: “Russia has no right to threaten Lithuania, and only Moscow is supposed to blame itself.” on the consequences of its unjustified invasion of Ukraine,” but he did not address the measures imposed by Lithuania.

It is known that “Kaliningrad”, with an area of ​​223 square kilometers, is the main base for the Russian Baltic Fleet and the 11th Army Corps, according to what Al-Arabiya.net reported from its biography, which also contains an arsenal of advanced weapons, such as the Kinzhal hypersonic missiles, as well as the capable platforms of Iskander. However, its population, which amounts to 450,000 at most, has become almost isolated since the beginning of the military operation in Ukraine, where trade routes have been disrupted and NATO member states have closed their airspace to Russian aircraft.

Alikhanov’s words to the population

However, Moscow continued to transport sanctioned products to it via the Lithuanian railways, until the two Lithuanians cut off the Russian access line to it “with a green light from Brussels.” Anton Alikhanov, the 35-year-old governor of Kaliningrad, urged the residents not to panic, and called them in a televised speech to Not to buy randomly, and he said in what was reported by the agencies that two ships will continue to transport needs across the Baltic Sea from the port of St. Petersburg, and that 7 more ships will join them by the end of the year, optimistic that this is enough to solve the predicament of “Kaliningrad” presented in a video below, which gives an idea of ​​it little bit.

Lithuania, with a population of two million and 800 thousand, and an area of ​​​​65 thousand square kilometers, had hardened with the Kremlin as its neighbors in the European Union, unilaterally ending its imports of Russian gas and oil, and preventing Belarusians and Russians from owning stakes in companies it considers necessary for its national security, so Moscow summoned its envoy against the backdrop of The ban, and called on the European Union to solve the problem, with a warning that it will free its hand in Lithuania on the Baltic Sea if the siege of Kaliningrad continues, plagued by many difficulties due to the military operation in Ukraine.

The most difficult Russian company in the region is Avtotor, which assembles cars, which employs 30,000 people in the province. It found itself at risk after major customers canceled their contracts, including German BMW, as well as Kia and its South Korean compatriot Hyundai, “forcing it to allocate small parts From the land for its workers to grow potatoes if they struggle to get enough food,” which was read by “Al Arabiya.net” in a report published by the American Radio Free Europe website, in which he said that 80% of Kaliningrad farms depend on imported seeds.