Liverpool stumbles with a draw with Tottenham 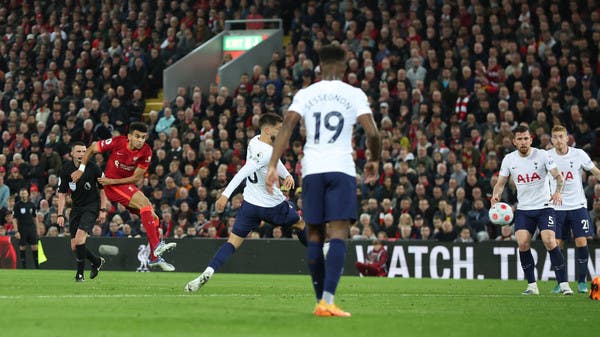 Liverpool stumbled in the heated race for the English Premier League title with a 1-1 draw against its guest Tottenham on Saturday in the thirty-sixth stage of the competition, giving Manchester City a valuable service three games before the end.

Liverpool have 83 points in the lead, with a goal difference from City, who will regain them if they win or even draw with their guest Newcastle on Sunday. Tottenham advanced through South Korean Son Heung-min (56), while Colombian Luis Diaz scored the equalizer for the hosts (74).

And in the event that City exits with the three points, it will go a long way towards crowning its fourth league title in the last five seasons, and deprives Liverpool of crowning the quartet after reaching the Champions League final against Real Madrid and reaching the cup final, where it will face Chelsea next Saturday and previously crowned the League Cup. .

Liverpool and City meet in their last three matches with Aston Villa and Wolverhampton, while City face West Ham and Liverpool meet with Southampton.

In the struggle for the Champions League positions, Tottenham have 62 points in fifth place, one point behind Arsenal, the fourth, which occupies the last qualifying positions and receives Leeds United on Sunday and five behind Chelsea, the third.

First, German coach Jurgen Klopp’s team threatened, through Senegalese Sadio Mane, with a right-footed shot from outside the area, which was blocked by French goalkeeper Hugo Lloris (3), before Uruguayan Rodrigo Bentancur responded with a far left shot that was also blocked by Brazilian goalkeeper Alison Becker (7).

Ryan Sessegnon almost caused a goal after he incorrectly returned the ball to his goalkeeper, which was picked up by Loris before it reached the Egyptian Mohamed Salah (28).

Liverpool put great pressure in the first half, while Tottenham relied on the rebounds, and the owners of the land almost opened the scoring, had it not been for the crossbar to save the header of the Dutchman, Virgil van Dijk (39).

The end of the first half witnessed two dangerous chances from the two teams, the first of which was Dias with a shot from outside, which was blocked by Loris, before the Danish Pierre-Emile Hojborg’s ball bounced off the post with a long shot as well (42).

Tottenham opened the scoring after the ball reached Harry Kane on the outskirts of the area and paved the way for himself and passed to Sesignon inside the area, who crossed to Son at the door of the goal followed by the net (56), raising his score to 20 goals in the league this season, two behind the leader Salah.

And Klopp made two changes to pay Portuguese Diogo Jota and Greek defender Konstantinos Tsimikas instead of Jordan Henderson and Scottish Andrew Robertson.

After the pressure, Liverpool managed to score the equalizer through Dias with a shot from outside the area that bounced from Bentancur before continuing its way into the net.