Local languages ​​in the courts so that the verdicts can be understood by the common people: Prime Minister Narendra Modi insists 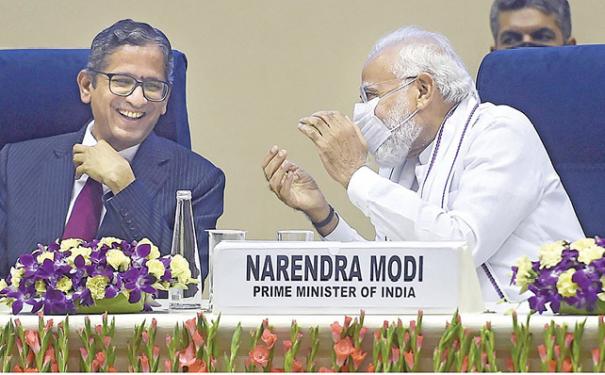 New Delhi: Prime Minister Narendra Modi has stressed the need to encourage the use of local languages ​​in the courts so that judgments can be understood by the common man.

A national seminar was held in Delhi yesterday with the participation of Chief Ministers and Chief Justices of the High Courts. Prime Minister Modi inaugurated the seminar after a gap of 6 years. Then he spoke:

The use of local languages ​​in the courts should be encouraged. This will increase the confidence of the common people of the country in the judiciary. Judgments must be in languages ​​that ordinary people can understand. If it is not understood it will only be viewed as a mere order. Except it does not know the order of the judiciary.

Why medical, law and technical courses are taught only in English, English and local languages ​​are used in courts in many countries. High Courts and Supreme Court functions are conducted in English only. Language is a kind of barrier to getting justice.

Chiefs of state should repeal outdated laws to facilitate the delivery of justice. In 2015, about 1,800 laws were found to be inappropriate and 1,450 federal laws were repealed. But state governments have only repealed 75 laws.

As we celebrate the 75th anniversary of Indian independence, we must focus on creating a judicial system that makes justice accessible, quick and accessible to all.

Chiefs and High Court judges should prioritize inquiries into long-term imprisonment of trial prisoners. In each district a committee headed by the District Judge may be set up to inquire into the case of the trial prisoners. Those trial prisoners can be released on bail if the opportunity arises. Thus spoke Prime Minister Modi.

Speaking at the seminar, Chief Justice of the Supreme Court NV Ramana said: “The first three pillars of democracy are the legislature, the administration and the judiciary.

About 4 crore cases are pending across the country. There are only 20 judges for every 10 lakh people. There are not enough judges to deal with cases. The required amount of space should be created for this. He should make arrangements to teach law education in his mother tongue, “he said.