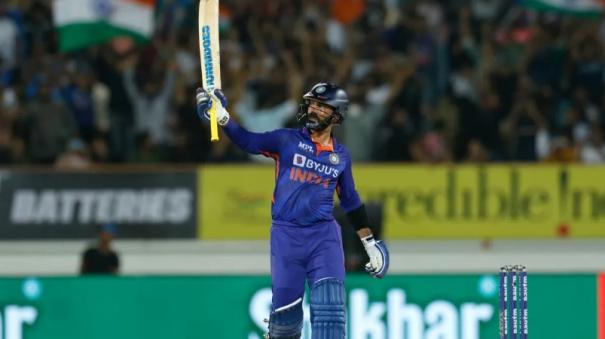 Bangalore: ” Do not look at age. Look at the performance, ”said former cricketer Sunil Gavaskar in support of Dinesh Karthik.

So far 97 players have made their debut in T20 cricket for the Indian team. Dinesh Karthik (DK) is the fourth player to make his debut for India in this list for the T20 format. Played in the first international T20 match played by the Indian team. The last match was against South Africa on December 1, 2006. DK scored 31 off 28 balls. About 15 years have passed since that match took place. He still plays for the Indian team today. All the players who played with him in that match have retired.

He has been playing well for the last few years and was named in the Indian T20 squad for his outstanding performance in the IPL series. He played well in the crucial phase of two matches in the series against South Africa and led the Indian team to victory. He proved his peak form by crossing the fifty in 27 balls yesterday. This raises the question of whether Dinesh Karthik will be included in the squad for the World Cup.

Gautam Gambhir recently said, “There are still a lot of days to go before the 2022 T20 World Cup. It is a bit of a challenge to say that. If Akshar Patel plays as the seventh player, it will be like there is less of a batsman in the Indian team. In that situation, I will give a chance to a young player like Deepak Hooda than Karthik. That had spoken.

Sunil Gavaskar has indirectly responded to Gambhir’s comment. It said, “When DK is not playing, I know people are talking about how he can be included in the team. How can he say he can not play. He may not be the one you want to be. Look at the form and select without looking at someone’s liking, name, etc.

Dinesh does not get many opportunities. He lands only in 6th or 7th place. Can’t wait to get down to that spot and hit a consistent fifty. He continues to make good 40 off 20 balls. He wants to play for India again, especially in the World Cup. It seems certain that this will probably be his last World Cup. So do not look at his age. Look at the performance, “said Sunil Gavaskar.