Macron: Ukraine’s accession to the European Union will take years 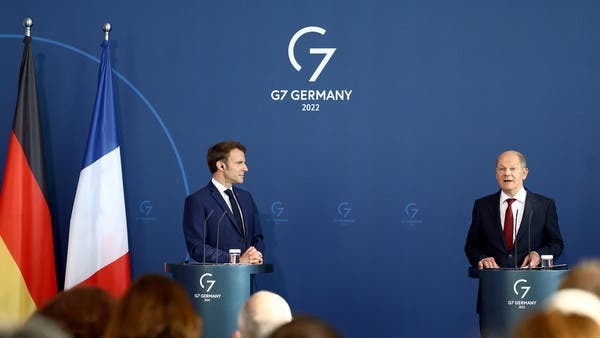 French President Emmanuel Macron said Monday that it would take years for Ukraine to join the European Union.

In a press conference with German Chancellor Olaf Scholz in Berlin, he renewed his call for a new European formula that would allow countries to join the European Union.

He also said that what is happening in Ukraine increases concern for the political situation in Europe, adding, “We must work to avoid a new war on the continent of Europe.”

In addition, the French president stressed that Britain “could have a place” in a broader European organization that includes democratic countries outside the European Union.

“The United Kingdom has decided to leave the EU but it can have a place in this political organisation,” Macron told reporters after holding talks with Schultz.

For his part, German Chancellor Olaf Scholz stressed that “Ukraine belongs to the European family,” noting that Macron’s proposal to create a broader European organization is interesting.

He said that Berlin would do whatever was needed to prevent the war from spreading to Eastern Europe.

He also added, “The sanctions we have imposed on Russia are historic,” calling for quick action to stop the war in Ukraine and the displacement movement.

These statements come after European Commission President Ursula von der Leyen announced earlier Monday that she had discussed with the Group of Seven support for the European Union and the European track for Ukraine, pointing out that the position could be issued next month (June).

In a tweet on her Twitter account, she said that she had discussed with the G7 the European Union’s support for the Ukrainian file, adding that the Commission was looking forward to receiving answers to the EU membership questionnaire.