Madhya Pradesh: A former tribal village headman married 3 girlfriends after living for 15 years and having a child 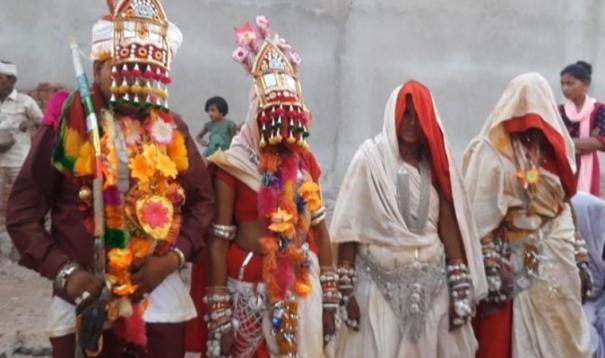 Indore: A tribal man in Madhya Pradesh married 3 girlfriends in the presence of his 6 children.

Samrat Maurya (42) hails from Nanpur village in Alirajpur district of Madhya Pradesh. Former village headman. He is a romantic monarch who has been in love with 3 women for the last 15 years and has been running a separate family without getting married. A total of 6 children were born to him.

Since he was not legally married, the tribe did not allow him and his 3 girlfriends to attend local temple ceremonies.

Also, their children had trouble getting married in the traditional way. Thus Samrat Maurya decided to formally marry all 3 girlfriends.

For this he held the hall and made grand arrangements for the wedding. Last Sunday, Maurya formally married 3 girlfriends in the presence of her 6 children.

When asked about the marriage, Alirajpur District Collector Raghavendra Singh said, “At present I cannot comment on whether it is legal to marry more than one woman in a tribal community. But there are customs and rituals that are unique to the tribe. We have to respect them. “