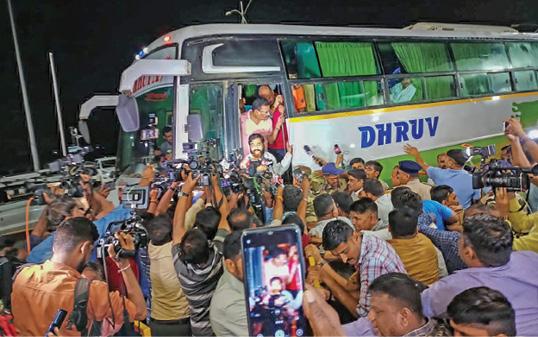 Mumbai: I have my resignation letter ready. Maharashtra Chief Minister and Shiv Sena leader Uttam Thackeray has said he is ready to resign at any time. Meanwhile, 34 disgruntled MLAs from the Shiv Sena, including the Independent, have written a letter to Governor Bhagat Singh Koshyari. All the disgruntled MLAs are staying at a luxury hotel in Assam.

The Maharashtra Enforcement and Income Tax Department has registered a case against the Maharashtra ministers in connection with the alleged money laundering and extortion. Ministers Nawab Malik and Anil Deshmukh were also arrested. This caused dissatisfaction among the ruling Shiv Sena MLAs.

Some Shiv Sena MLAs have said that peace in Maharashtra can only be achieved if there is a smooth trend with the BJP-led central government.

In this context, the BJP won 3 of the 6 seats in the recent state assembly elections. The BJP had a chance of winning only 2 seats while 23 MLAs voted as independents and opposition MLAs. The BJP also won the post. In this situation, the BJP defeated the ruling alliance in the Maharashtra Upper House elections held 3 days ago.

Therefore, many blamed the lack of cooperation within the Maha Vikas Agadi alliance.

Minister Eknath Shinde, who is chairing the Shiv Sena Legislative Assembly, was with Chief Minister Uttam Thackeray until 5 pm during the Upper House elections.

After that he and some Shiv Sena MLAs suddenly disappeared. It was later revealed that they had gone to Surat, Gujarat, overnight with Minister Eknath Shinde and stayed at a hotel there.

The list of 30 disgruntled Shiv Sena MLAs with Eknath Shinde has been released. They have raised the banner against the Shiv Sena leadership. With the support of Shiv Sena disgruntled MLAs, smaller parties and independents, the BJP is pushing for the overthrow of Uttam Thackeray’s government.

A Shiv Sena MLA has recently died. Thus the current strength in the 288-member legislature is 287. Thus the BJP can form a government with the support of 144 MLAs. There are 26 MLAs as small parties and independents.

Meanwhile, Eknath Shinde-led MLAs from Surat yesterday went to Guwahati in Assam and stayed at a luxury hotel there.

The Cabinet meeting was chaired by Chief Minister Uttam Thackeray yesterday afternoon. Uttam Thackeray has a corona infection and he attended the meeting through a video facility. A meeting of Shiv Sena MLAs will be held at 5 pm, party senior leader Sanjay Rawat said.

Meanwhile, 34 disgruntled Shiv Sena MLAs have written a letter to Governor Bhagat Singh Koshyari. In it, they mentioned that their legislature was led by party leader Eknath Shinde.

Sources close to Shinde said, “There are 55 Shiv Sena MLAs in the assembly. Of these, 30 are Shiv Sena MLAs and 4 are independent MLAs staying at a Guwahati luxury hotel. All 34 have made it clear that their leader is Eknath Shinde. A letter written by all 34 of them has been sent to Governor Koshyari. ”

Following this, Chief Minister Uttam Thackeray spoke to the people through the social networking site Facebook in the evening. He said, “I have prepared my resignation letter. Ready to resign anytime. The Shiv Sena will not deviate from Hindutva policy.

The MLAs who are with Eknath Shinde are just talking to me on the phone. I am ready to resign. But the person who will be the Chief Minister behind me must be from the Shiv Sena.

If any of the disgruntled MLAs come before me and say I do not want to continue as prime minister, I will resign immediately. ” Meanwhile, party sources said that Uttam Thackeray has decided to dissolve the assembly.

Shiv Sena MLA Nitin Deshmukh, who was staying with Eknath Shinde in Surat, returned to Mumbai yesterday morning. He said he had been abducted and forcibly injected and that he would always support Chief Minister Uttam Thackeray.