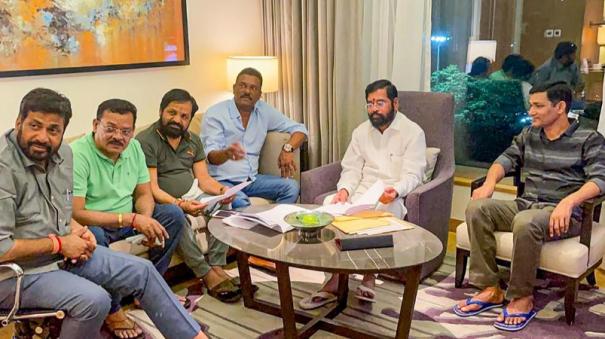 Maharashtra is ruled by a coalition of Shiv Sena, Congress and Nationalist Congress Party. Shiv Sena chief Uttam Thackeray is the new chief minister. After nearly two-and-a-half years in power, Shiv Sena senior leader and state minister Eknath Shinde has abruptly raised the banner against the party leadership. He is said to be accompanied by about 40 Shiv Sena MLAs and 7 independent MLAs. They are currently staying at a luxury hotel in Guwahati, Assam.

Disgruntled MLAs have been urging the Congress to step down and form a new government with the BJP. In this context, Shiv Sena senior leader Sanjay Rawat told reporters in Mumbai yesterday:

Shiv Sena MLAs must return to Mumbai within 24 hours. All your requests will be considered. You can talk directly to Chief Minister Uttam Thackeray. Kailash Patil and Nitin Deshmukh have returned to Mumbai. 21 MLAs are talking to us from Guwahati. They want to return to Mumbai. We will definitely win if there is a confidence vote. Thus he said.

The by-elections in Maharashtra’s Bandarpur constituency were held in 2021 following the death of Nationalist Congress Party MLA Bharat Phalke. BJP candidate Samathan Adade won. This increased the strength of the BJP MLAs to 106. The BJP alliance parties have 13 MLAs. The Maharashtra Nava Nirman Sena, which supports the BJP, has an MLA. The Eknath Shinde team is said to have 48 MLAs. In all, the BJP is likely to get the support of 168 MLAs.

In this context, a meeting of Shiv Sena MLAs was held in Mumbai yesterday. Chief Minister Uttam Thackeray, who is suffering from corona infection, addressed the gathering via video. Only 13 Shiv Sena MLAs were present. 2 Shiv Sena MLAs returned to Mumbai yesterday from Guwahati. Including them, the party currently has 15 MLAs. The political crisis in Maharashtra is coming to an end as the majority of the ruling coalition is in question.