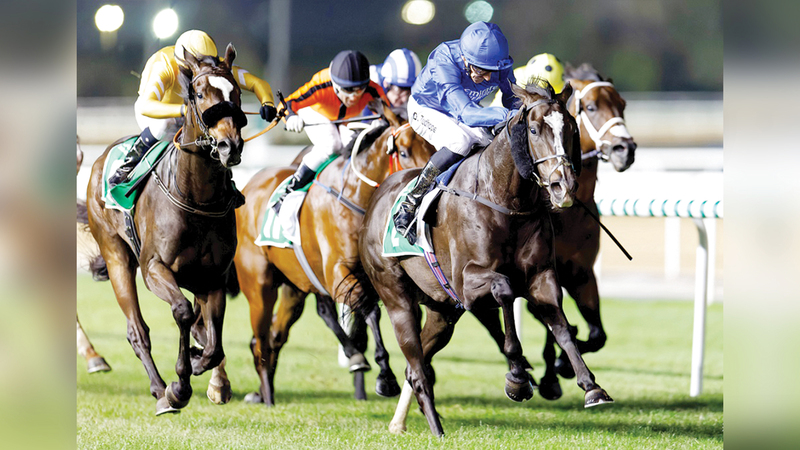 The first participation of the Godolphin “Open Mind” horse, under the supervision of its coach, Saeed bin Suroor, smiled with victory in the main fifth round of the tenth race of the Meydan International Racecourse, which was organized by the Dubai Racing Club the day before yesterday, and its seven runs sponsored “DVCC Meta Technology” with prizes amounting to 615 thousand dirhams.

The race ceremony coincided with the launch of the Dubai Racing Club, in partnership with “DVCC Meta Technology”, for the “Dubai Virtual World Cup” or “Dubai Fierce Cup”, the first of its kind globally in the world of “Metaverse”.

Knight Daniel Tudhope succeeded in driving the horse “Open Mind” to cross the finish line of the 1,400-meter grassy track on which the main half extended, with prizes of 95 thousand dirhams, with a time of one minute, 23 seconds and 31 parts of a second, superior by half a length from the second-placed horse. “Western Symphony” with the logo “Al-Rashid Stables” and supervised by coach Bobat Semar.

In the rest of the results, the horse “RB Second Tunon” with the “Pairly” racing logo and the supervision of coach Hilal Al-Alawi opened the evening by winning the first half for purebred Arabian horses for a distance of 1600 sandy meters, before the horse snatched “Sari Dubai” with the slogan Saeed Sultan Al-Rahoumi, under the supervision of the coach. Doug Watson won the second half of the 1,600-meter grass novices.

The third round, which was devoted to a distance of 1,200 sandy meters, bore the title of the first victory in the “Magic Petish” horse’s march, owned by Muhammad Ahmed Al-Sabousi and supervised by coach Ahmed Bin Harmash.

Coach Doug Watson’s name returned to brightness again in the evening, with the horses he supervises training winning two additional victories, which came in the fourth and sixth halves for the “Handicap” category horses and for distances of 2000 meters grass and 1900 meters sandy, with the signature of the two horses “Al-Nayer” with the slogan of Al-Bashir Salem Al-Harbi And “near” owned by Nasser Askar.

And the curtain closed the evening with the victory of the horse “Leading Spirit”, owned by the “Touch Gold Racing” syndicate, and under the supervision of coach Bobat Semar, with the title of the seventh and final round, which took place for a distance of 1000 meters in the grass.