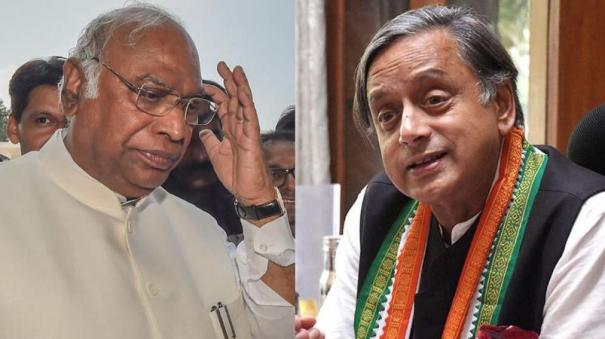 New Delhi: There will be a direct contest between Mallikarjuna Kharge and Sasi Tharoor in the election of the Congress president on the 17th. The question arises as to who has the chance to win.

For the past several years, the leadership of the Congress party has been in the hands of the Gandhi family. The Gandhi family has decided to stay away from the post of party president to deal with the BJP, which is raising the same complaint. Thus, for the first time after many years, the election for the post of National President of the Congress Party is going to be held on October 17.

Ever since the announcement of the election of the Congress president, there have been daily reports that he will contest and that he will contest. This created great confusion among Congress workers across the country. The party leadership also came under heavy criticism.

Thiruvananthapuram Lok Sabha Constituency MP is the first person in the 5th election for party leadership. Sasi Tharoor offered to contest. Subsequently, the names of many people including Rajasthan Chief Minister Ashok Khelat were released and created a stir. Finally, Leader of the Opposition in the Rajya Sabha, Mallikarjuna Kharge, has filed his nomination for the post of party president. Jharkhand senior Congress leader KN Tripathi also filed a petition along with him. As Tripathi’s nomination was rejected, it was a direct contest between Kharge and Sasi Tharoor. Who among them will win? Who was supported by Gandhi family? Questions have arisen like who has the support of the Congress leaders who are going to vote.

Although Tharoor was better educated than him, Kharge had joined the Congress years before him. Kharge, now 80, graduated from Chet Shankar Lahoti Law College in his home state of Karnataka. Tharoor, 66, holds a doctorate from American University after higher education at Delhi’s prestigious St. Stephen’s. Kharge joined the Congress Party in Karnataka in 1969. UN A foreign affairs expert, Tharoor entered politics in 2009 and joined the Congress.

Since then, Sasi Tharoor has been serving as the Congress MP from Thiruvananthapuram constituency for the 3rd time in a row. Kharge became a Lok Sabha MP in 2004, who started voicing for workers. Mallikarjuna Kharge has more experience in politics and government administration than Sasi Tharoor. Kharge was the Union Minister of Labor and Railways in the 2nd regime of the Congress-led United Progressive Alliance (UPA). Prior to this, he held 6 ministerial posts in Karnataka. He is the Leader of the Opposition in the Lok Sabha. Kharge has stepped down from the post of Leader of Opposition yesterday as he is contesting the election of party leader.

Sasi Tharoor was only Union Minister of State and HRD for a short period in the 2nd regime of UPA. However, from 1978 to 2007, he was appointed by the UN. He has deep experience in the administration of the Department of External Affairs.

Considered a grassroots activist of the Congress in politics, Kharge has been a 9-time MLA in Karnataka since 1972. He was also a 2-time Lok Sabha MP. He also served as Karnataka Congress president from 2005 to 2008. At this stage the Congress had a great victory. At the same time MP for the third time. Sasitharur, who contested the election, has won despite the wave of Prime Minister Modi. Until Prime Minister Modi took the top spot in 2013, Shashi Tharoor was the most followed person on Twitter. But Kharge does not have even one lakh people till date.

Above all, Shashi Tharoor was one of the G-23 leaders who raised the flag for the first time against the Congress leadership. However, most of the key leaders of the G-23 have come out in support of Kharge. They wanted change in the leadership of the party. Kharge was a leader in many protests in support of the Gandhi family. In confirmation of that, Kharge was accompanied by many important leaders close to the Gandhi family when he filed his nomination.

Kharge was the leading contender for the post of chief minister in Karnataka in 1999 and 2004 under the Congress regime. However, he was not made Chief Minister. Now, Kharge has got an opportunity to contest the election of the Congress president, giving priority to the Dalit community. If he wins, Kharge will be the Congress leader and the second Dalit leader after Jagajeevan Ram.