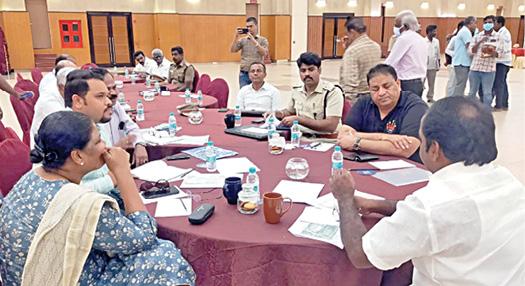 Mamallapuram: Minister of Youth Welfare and Sports Development CV Meyyanathan inspected the arrangements made at the hotel where the International Chess Olympiad is to be held in Mamallapuram.

The 44th International Olympiad Chess Tournament will be held at Mamallapuram, Chengalpattu District on July 27 at the Star Hotel. To be held until the 10th. Of these, 2,000 players from 150 foreign countries are expected to participate.

Thus, the Mamallapuram and ECR roadside beach resorts are being inspected to see if they have all the basic facilities for players to stay.

In this, various committees and ministers are conducting face-to-face research on the accommodation of players in hotels, improving facilities for them and undertaking infrastructure facilities internationally. In this context, the Minister of Environment, Climate Change and Youth Welfare, Sports Development Siva Meyyanathan conducted an inspection in person yesterday.

In this, the Minister inspected the luxury accommodation where the competition will be held and another sports complex to be set up as an alternative arrangement. The event was attended by Indian Chess Federation Secretary and Olympiad Director Parath Singh Chauhan, Executive Committee Member Shankar, Sports Secretary Apurva, Committee Chairman Anand Kumar, District Collector RR Rahulnath, SP Sukuna Singh and many others.

Later, the Minister told reporters: As the International Chess Olympiad is about to take place, we plan to complete all the preparations for it by July 10. Officials led by the Chief Minister have been working for this.

In addition, work is underway to set up an additional 42,000-square-foot stadium for the tournament. He said studies were being carried out from time to time to make various arrangements on behalf of all government departments, including security.