Mamta again overshadowed Modi-Shah, p. BJP on the verge of collapse in Bengal 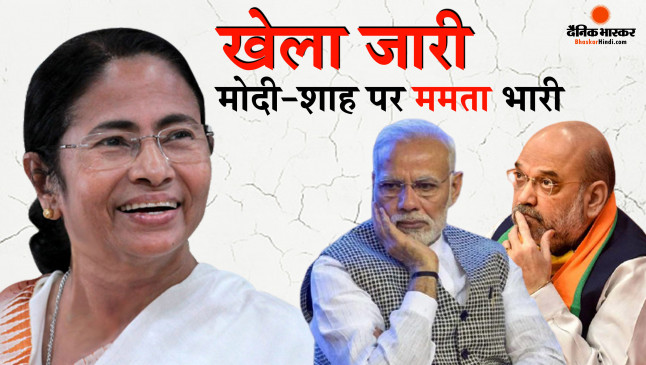 Digital Desk, p. Bengal. The political summer of West Bengal, which started with Khela Hobe’s jumla, may have reached the results. But once again the game of Mamta Banerjee, who took the crown of Chief Minister in her possession, has not stopped. Before the elections, the BJP fought fiercely. In Mamta’s soil, Modi’s manush kept trying to strengthen his hold. But as soon as the veterans started leaving, Mamta Banerjee has once again proved that no one has a stronger hold in the soil of Bengal than her.

A few days after the results, again the ruckus
Political turmoil has started again in West Bengal recently. Barely two days ago, Mukul Roy left the BJP and returned to the TMC. Since then BJP has reached the verge of collapse. The game of TMC has started within BJP. This can be gauged from the fact that even the big leader of BJP in West Bengal, Suvendu Adhikari, is not able to keep his MLAs tied up. Remind me Suvendu is the same leader who used to be special to Mamata Banerjee. But this time before the assembly elections, he turned to BJP. He also defeated Mamta Banerjee from Nandigram. However, now the winning bet is also seen slipping out of his hands.

BJP on the verge of collapse
Signs of breakdown in BJP started when the number of MLAs with Suvendu Adhikari appeared to be less. In fact, Suvendu Adhikari had come to meet Governor Jagdeep Dhankhar. 51 MLAs were also present with him. On this occasion, Suvendu had reached the Governor to discuss about the violence during the elections. But more than this meeting, the issue heated up that why only 51 MLAs reached with Suvendu. Whereas BJP has 77 MLAs in the state.

Where have 26 MLAs disappeared?
Since this meeting, the question is in the headlines that where were the remaining 26 MLAs missing. The BJP itself has not been able to answer this issue so far. This situation with BJP in Bengal has been created at a time when TMC is in touch with its old leaders who have gone to BJP very fast. Since the return of Mukul Roy, it is being speculated that there is still more sabotage in the BJP. There is also speculation that Mamta Banerjee is busy in contacting her old colleagues through her loyalists. Therefore, it is believed that in the coming time, BJP may have to face more losses.