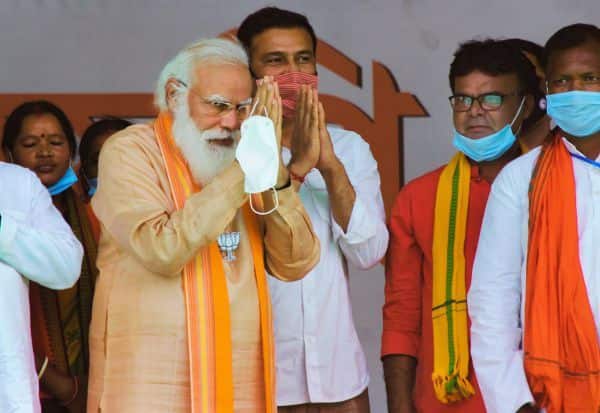 Purulia: ” West Bengal Chief Minister Mamata Banerjee’s game of vote bank politics to satisfy a few is coming to an end. After that, development work will start in the state, ” said Prime Minister Narendra Modi.

In West Bengal, the government of Trinamool Congress, headed by Chief Minister Mamata Banerjee, is located. For the state assembly, elections are to be held in eight phases.
Speaking at a campaign rally in Purulia yesterday, Prime Minister Narendra Modi spoke in support of the BJP candidates:

Mamta is working to satisfy a few and for their vote bank. That is why there has been an increase in illegal immigration from neighboring countries. However, the welfare of the Dalits, the backward and the tribal people of this state is not important to him. Through this, they are helping the Maoists.

The results of the May 2 assembly elections are out. That day is set to end Mamta’s game. After that, development work in the state will begin, he said. Speaking at a campaign meeting here yesterday, where the assembly elections are looming, Modi said: “The Congress will not hesitate to go to any lengths to get votes and spread false ideas among the people. He said the Congress had formed an alliance with the AIIDF, a religious organization, despite opposition from the party itself.

West Bengal Chief Minister Mamata Banerjee said at a campaign meeting in Kolkata yesterday that the Trinamool government had spent crores of rupees on Amban storm relief work. Some of it may have gone unnoticed here and there. But at the time of the storm, we stayed with the people and worked for them. Where did the BJP leaders go then? They never stood in front of people for trouble. Now that the election is coming, the voters arrive with bundles of cash in helicopters
They are trying to attract weeds and steal votes. After winning the West Bengal elections, our next goal is to form a government in the middle.
Thus he spoke.