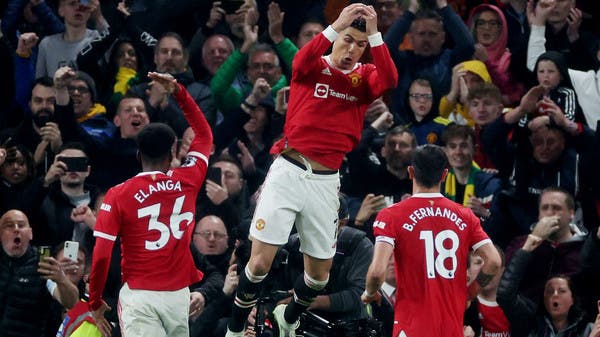 Manchester United bid farewell to its angry fans, and perhaps its Portuguese star, Cristiano Ronaldo, with a 3-0 victory over its guest Brentford at the end of the thirty-fifth stage of the English Premier League on Monday.

After logically losing the possibility of achieving fourth place, the last qualifying for the Champions League, after failing to win in its previous three matches (two losses and a draw), United entered the last match at home in search of a final victory in front of its fans.

The goals of the match were scored by Bruno Fernandes (9), Ronaldo (61 from a penalty kick) and French Raphael Varane, who scored his first goal with the club (72).

Many reports indicated the possibility of Ronaldo leaving the “Red Devils” this season after failing to reach the Champions League, after returning early this season for a second period after the first between 2003 and 2009.

And after he played the 37th, penultimate stage match, earlier against his guest Chelsea (1-1) because the London club was busy in the cup final against Liverpool on May 14, United will next come to Brighton before concluding the season at Crystal Palace.

After a fifth consecutive season, during which United failed to win any title, Dutchman Eric Ten Hag will supervise the team from next, with Rangnick remaining to play an advisory role, despite his appointment last week as coach of the Austrian national team.

United opened the scoring after a ball behind the defenders from Portuguese Diogo Dalot reached the Swedish youngster Anthony Ilanga inside the area, crossed it to Fernandes, who followed it on a strong bird in the net, scoring his tenth goal in the league this season and fifty with the club since his arrival at the beginning of 2020 (9) .

The guests then tried with a shot from Danish Christian Eriksen from outside the area, which was blocked by Spanish goalkeeper David de Gea (11). Then two attempts were made for Brentford, through the header of Frenchman Brian Mbomo, which passed next to the post (17), and another of Evan Toni crossed the crossbar a little (22). And then Juan Mata and Ronaldo presented a beautiful glimpse before the latter passed the ball behind his foot to the Spaniard, who hit the ball while it passed near the post (33).

The cooperation between the players was renewed, and Ronaldo scored the second goal for his team after a pass from Mata, who may have played his last match with the club to the outskirts of the region, but the goal was canceled due to the infiltration of the Portuguese after invoking the video assistant referee “VAR” (44). After the break, Fernandes missed a real chance to score his second personal goal after receiving a superb ball that fell deep into the depth from the Serbian Nemanja Matic, who will leave the team at the end of the season. He penetrated into the area and shot from a good position, but his ball passed by the post (53).

Then De Gea saved a powerful shot by Eriksen from a free kick (55). Ronaldo made up for what he missed after personally receiving a penalty kick from Rico Henry who kicked it to the right of the goalkeeper (61), raising his score to 18 goals in the league this season, in third place in the scorers’ standings.

Varane scored the third goal after he followed the ball from a close distance with his right from a corner taken by Brazilian Alex Telles (72).

And in the 73rd minute, 17 minutes before the end of the match, a number that represents the years since the American Glazers took ownership of the club, some fans left in protest against the owners’ policy.