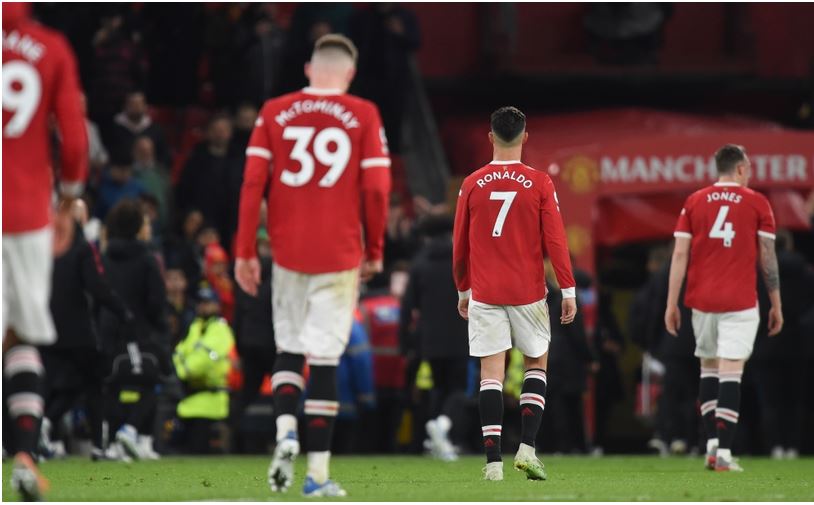 Although Portuguese star Cristiano Ronaldo managed to avoid a third defeat in a row, Manchester United’s hopes of participating in the Champions League evaporated by drawing 1-1 at home with rivals Chelsea on Thursday in a match presented in the 37th stage of the English Premier League in football.
The team of the temporary German coach, Ralph Rangnick, entered the match presented due to Chelsea’s busyness in the cup final against Liverpool on May 14 at Wembley Stadium, against the background of two losses against Liverpool and Arsenal, respectively, and therefore was required to win Thursday against Chelsea.
But the London team was the best party throughout the meeting, and getting out of the confrontation with the team of German coach Thomas Tuchel was the most that the “Red Devils” could aspire to, based on the course of the meeting.
And by five points behind Arsenal, the last fourth-placed qualifier for the Champions League with two games more than the London club, it became very difficult for United to guarantee its participation in the Champions League, while Chelsea decided its participation significantly after strengthening its third position with 66 points and a difference of 8 points. About his neighbor Tottenham Fifth.
After a start in favor of Chelsea, United gradually entered the atmosphere of the meeting, but without a threat to the goal of Senegalese goalkeeper Edouard Mendy, but soon the latter’s colleagues returned to impose their absolute dominance over the course of the game and go towards the goal of the Spaniard David de Gea, who bore the burden of the incursions of the Germans Kai Havertz, Timo Werner and Mason Mount .
From two attacks led by the Frenchman, N’Golo Kante, at high speed, Haverts almost opened the scoring, but he shot in the first near the post (27) and then collided in the second with the brilliance of De Gea (28), who also intervened in the 36th minute to stand in the face of the German header.
And the negative tie remained the master of the situation until the end of the first half, then Chelsea II started in the same way with control and several attempts, one of which resulted in the goal of the lead with a wonderful shot “Ali Al-Taher” by Spaniard Marcos Alonso after a cross from Reece James, headed by Haverts (60).
But United did not wait long to equalize through Portuguese star Cristiano Ronaldo, who broke the offside trap after a pass from Serbian Nemanja Matic, and then alone with Mandi before firing the ball into the roof of the net (62), scoring his seventeenth goal in the league and twenty-third in all competitions this season. .
After that, Chelsea returned to besiege its host in his area and was close to regaining the lead if Reese James was not unfortunate after his shot rebounded from the right post (80), then the result remained the same until the final whistle.