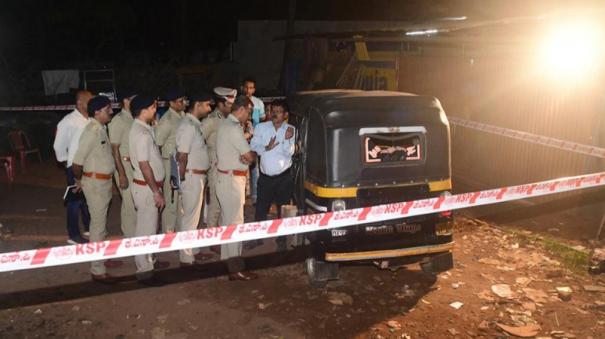 The driver Purushottam Pujari (37) and the passenger Mohammad Shareek (24) were injured in a cooker bomb blast in an auto in Mangaluru, Karnataka on the 19th and are undergoing treatment at the hospital.

7 separate police are investigating in this regard. Also, more than 20 people who were in touch with Mohammad Shareek are being investigated. Apart from this, the National Investigation Agency (NIA) and Enforcement Directorate officials are reportedly probing Shariq’s international connections.

In this case, a mysterious letter came to the Mangalore City Police Commissioner’s office. In it, an organization called the Islamic Resistance Council (IRC) has claimed responsibility for the auto blast incident.

Special police and NIA officials are investigating the background of this little-known new organization.

Karnataka Law and Order ATGP Alok Kumar said: A letter has been received from an organization called Islamic Resistance Council. The letter, typed in English with a picture of Mohammad Shareek, read, ‘Open war has been declared on us (Muslims) and gang-by-gang killings are going on.

Oppressive laws are passed that interfere with our religion. Innocent members of our religion are arrested on false charges and are languishing in jails. We will definitely reciprocate.

Our brother Mohammad Shareek tried to attack the Khatri Hindu temple near Mangalore. Although his mission was not fulfilled, we consider it a success that central and state investigative agencies are looking for us.

We remind you that although the bomb prepared by Shareek has exploded early, we will take more serious action in the future. You are happy because Mohammad Shareek has been arrested. This happiness will be short-lived’.

Shareek in Danger?: Meanwhile, reports surfaced in the media that Shareek was in a critical condition. When asked about this at the private hospital where he is undergoing treatment, he said, “Even when the cooker bomb exploded, the detonator in it did not explode. If it had exploded, there would have been massive damage.

When the gelatin bomb exploded, the lid of the cooker hit Shareek hard in the jaw and face. His right eye sight is affected.

45 percent of the body is burnt. In particular, severe injuries have occurred on the arms and legs. The lungs are also affected due to the toxic fumes. Considering his condition, he has been kept in the intensive care unit and is being treated by a team of 8 doctors. It is wrong to say that Shareek is in critical condition.

Hopefully, with continued treatment, the condition will improve. It may take up to 25 days to see good improvement in physical condition. After that, the police will start the investigation.

NIA case against Shareek: In this case, last Aug. The NIA has registered a case against Mohammad Shareeq (24), Mas Ahmed (22) and Syed Yasin (22) for carrying out and rehearsing the blast in Shimoga on 15th.

Apart from this, the Shimoga police have registered a case against these 3 people under the Prevention of Terrorism Act ‘UPA’ in the case of burning the national flag in September.

It is said that the NIA officials have decided to take into custody and interrogate Mas Ahmed and Syed Yasin, who were arrested in the case of burning the national flag and are lodged in Shimoga jail.