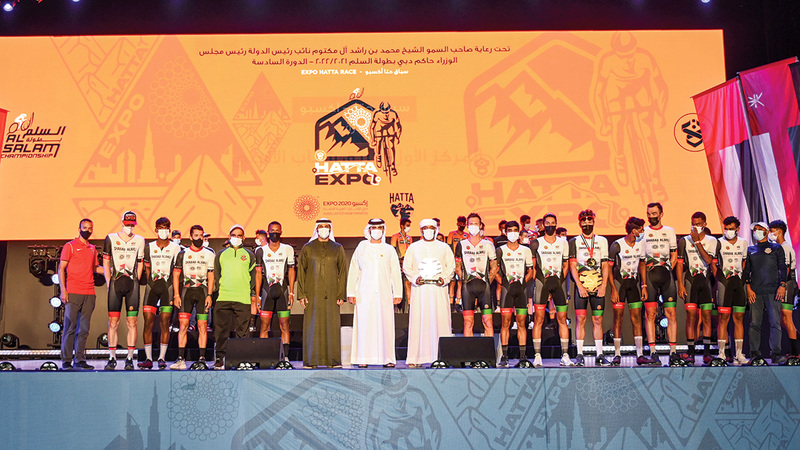 His Highness Sheikh Mansour bin Mohammed bin Rashid Al Maktoum congratulated the winners, wishing them more success, and His Highness crowned the first place winners, yesterday, at the Jubilee Theater in “Expo 2020 Dubai”, after they covered a distance of 150 km from the starting point in the Hatta region, up to « Expo” amid a public reception and great interaction with the race, which is considered the latest of its kind, and its prizes amounted to one million dirhams, which were distributed to the owners of the first 20 places.

The coronation ceremony was attended by the Chairman of the Higher Organizing Committee of the Peace Cycling Championship, Amir bin Juma Al Falasi, Secretary General of the Dubai Sports Council Saeed Hareb, and a number of officials from government departments and institutions and representatives of sponsors.

The Chairman of the Higher Organizing Committee of the Salam Cycling Championship, Amir bin Juma Al Falasi, thanked His Highness Sheikh Mansour bin Mohammed bin Rashid Al Maktoum, Chairman of the Dubai Sports Council, for his kindness to crown the winners of the Hatta-Expo race, which reflects the support of the rational leadership for sport in general. Including cycling and the Salam Championship for bicycles in particular, which continues to develop thanks to the support, care and follow-up of His Highness Sheikh Mohammed bin Rashid Al Maktoum, to become one of the largest and most important cycling championships on the agenda of local, regional and international sporting events.

Al Falasi considered that the selection of this path, which started from the Hatta region and reached Expo 2020 Dubai, was in line with an important occasion, the fiftieth anniversary of the Union, and the celebration of the renaissance and achievements of the UAE at all levels, noting the participation of cyclists from the Gulf Cooperation Council countries, to The side of the elite contestants of different nationalities, so that the race embodies the positive interaction between all the peoples participating in the “Expo”.

• One million dirhams in prizes for the top 20 winners out of 229 contestants of 37 nationalities and 21 teams who participated in the event.

The Golden Jubilee Race on the 18th of this month