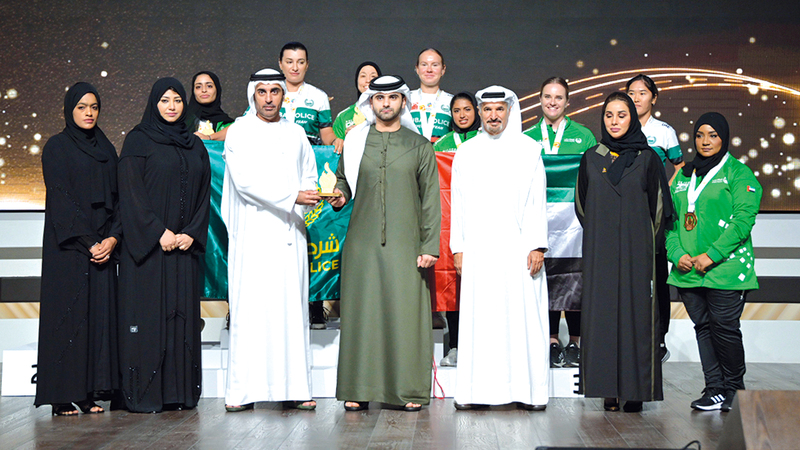 His Highness Sheikh Mansour bin Mohammed bin Rashid Al Maktoum, Chairman of the Dubai Sports Council, honored the teams of government and private departments and institutions and the winning athletes in the “Sheikha Hind Sports Games for Women”, which concluded its tenth edition yesterday evening, with the participation of large women exceeding 1,500 athletes, who competed in 10 sports.

His Highness extended his highest thanks and gratitude to the wife of His Highness Sheikh Mohammed bin Rashid Al Maktoum, Vice President and Prime Minister of the UAE and Ruler of Dubai, Her Highness Sheikha Hind bint Maktoum bin Juma Al Maktoum, for her highness’s support and sponsorship of this major sports tournament, and support for Emirati women in general. and women’s sports in particular.

His Highness congratulated all the winners and participants in this distinguished session during the ceremony that was held on this occasion at the headquarters of the “Mohammed Bin Rashid Library”.

His Highness added: “The Dubai Sports Council has always been keen to adhere to the UAE’s approach to supporting women in various fields, and has worked to empower them in the sports field, by organizing many competitive and community events throughout the year, and in various sports, but this annual event occupies a place Distinguished in the programs of the Council, and in the sports sector in general, because of its privacy gained from the precious name it bears, as well as the role of this event in spreading the practice of sports and developing its levels, until the session became the most important annual event at the level of women’s sports, and over the course of 10 years it attracted more participation From 360 government and private agencies, more than 7,000 athletes, most of them Emirati women.