Mansour bin Mohammed: The Dubai Sports Conference is a global platform for meeting stars and discussing the future of football 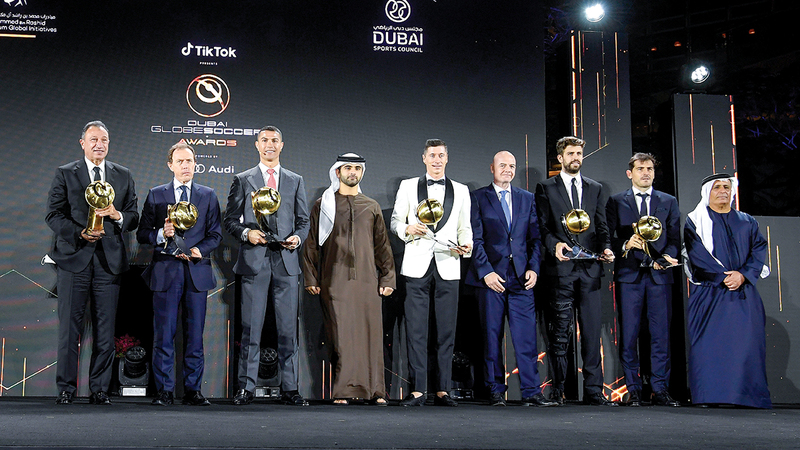 His Highness Sheikh Mansour bin Mohammed bin Rashid Al Maktoum, Chairman of the Dubai Sports Council, welcomed the participants in the 16th Dubai International Sports Conference, a member of the “Mohammed bin Rashid Al Maktoum Global Initiatives”, which is organized by the Dubai Sports Council. His Highness also welcomed the participants in a ceremony The 12th edition of the “Dubai Globe Soccer Awards”, the two events whose work will be held today under the slogan “Meeting of the World”, will be held at the Armani Hotel in the “Burj Khalifa”.

His Highness, Chairman of the Dubai Sports Council, stressed that Dubai’s position will soon be strengthened on the world sports map with a series of qualitative achievements, with hosting the most important and largest international events in many games, in light of its world-class infrastructure, while representing the interest of the rational leadership. In the sports sector and encouraging creativity in it, it is a source of inspiration for the Dubai International Sports Conference, in which the elites of coaches, players, leaders of international federations and clubs and decision makers in the field of the popular game participate every year.

His Highness said: “The Dubai International Sports Conference is a global platform for meeting the stars of the game and those in charge of it to discuss the reality and future of football, as well as meeting with decision-makers in the field of football in the country and forming a network of relationships that contribute to benefiting from successful professional experiences,” noting the importance of the event in Confirming the UAE leadership in creating a better future in various fields, including the sports field.

His Highness concluded: “We were keen to provide all the ingredients for success for this important event, bearing in mind the success achieved in the last session, as the Council organized the fifteenth session of the conference and the eleventh of the Dubai Globe Soccer Award with the direct attendance of all stars, and with the participation of the President of the International Football Association and senior officials The stars of the game, and we were the world’s first in organizing because of our confidence in the precautionary measures followed and the confidence of the world in us and in our abilities to deal with the exceptional situation the world is witnessing, and today we continue the march to maintain the distinguished position of this event that was born in the UAE and reached the global fore.”

The activities of the Dubai International Sports Conference will begin today, at seven in the evening, followed by the coronation ceremonies of the winners of the “Dubai Globe Soccer Award”.

• «The conference reflects the UAE leadership, and Dubai’s growing position in the global sports arena».

The nominees for the Dubai Globe Soccer Awards

The winning athletes will be honored in the award categories, based on the results of voting by professionals and more than five million fans from around the world.

The vote for the best player for the year 2021 ended with Karim Benzema, Robert Lewandowski, Kylian Mbappe, Lionel Messi, Cristiano Ronaldo and Mohamed Salah, noting that the order of the names was not done according to the number of votes that will be announced only on the day of the ceremony.

The same players are also competing to win the award for the best player in the world among the fans through the “Tik Tok” platform for the year 2021.

In the category of the best men’s team for the year 2021, the competition was limited to Al-Ahly of Egypt, Al Hilal of Saudi Arabia, Atletico Madrid, Chelsea, Flamengo of Brazil and Manchester City.

The category for the best national team for the year 2021 included the teams of Argentina, Brazil, France, Italy and Morocco.

The most important players in the various lines of play will be present. In addition to the best player in the world who is confined to the most important strikers in the world, there will be an award for the best scorer, and the strongest defenders will compete to win the Best Defender award for 2021, as they reached the final stage of voting to choose the winner: Trent Alexander-Arnold of Liverpool, Cesar Azpilicueta, Antonio Rudiger of Chelsea, Leonardo Bonucci and Giorgio Chiellini of Juventus, Ruben Diaz of Manchester City.

The conference begins with a session that brings together two of the most important global football stars, namely: Robert Lewandowski, the Bayern Munich striker and captain of the Poland national team, and Kylian Mbappe, the star of France and Paris Saint-Germain, and the most important young striker in the world currently in a dialogue session. The two players met in any dialogue session before, so that the conference continued to present the new in each session.

The session sheds light on the ideas and opinions of the two international stars on many issues related to world football, as well as building successful teams or how professional players deal with refereeing.