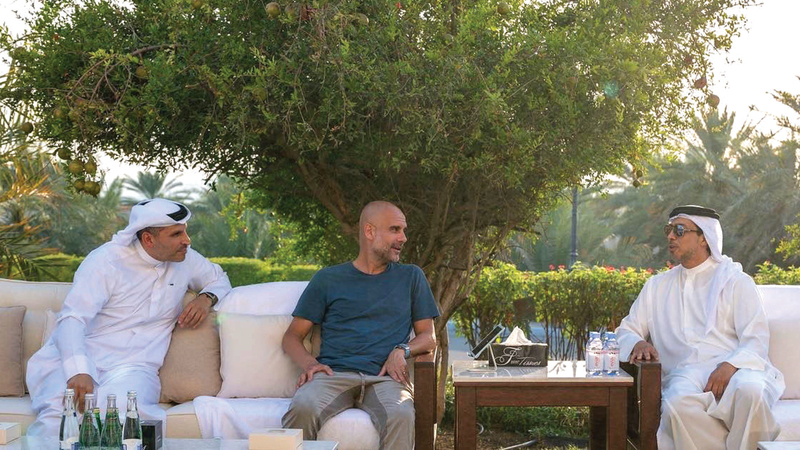 His Highness Sheikh Mansour bin Zayed Al Nahyan, Deputy Prime Minister and Minister of Presidential Affairs, owner of Manchester City club, received the coach of the team, Pep Guardiola, in the presence of the club’s Chairman of the Board of Directors Khaldoun Al Mubarak.

The official account of His Highness Sheikh Mansour bin Zayed on the social networking site “Twitter” yesterday said: “The meeting came in the wake of the club’s recent victory in the English Premier League, and to discuss plans for the next season 2022-2023.”

City won the English Premier League title at the end of May for the fourth time in the last five seasons, and the title is the 11th for Spanish coach Guardiola at the Etihad Stadium during his amazing six years since taking over the job.

Manchester City’s harvest of the league title last season was the culmination of the great support provided by His Highness Sheikh Mansour bin Zayed to the players and coach Guardiola, as the team showed a strong personality, especially in the last rounds of the season in the face of pressure from the Liverpool team chase until the last round.

It is noteworthy that the English Premier League champion entered the summer transfer market early, after agreeing to a preliminary deal with German Borussia Dortmund to include Norwegian player Erling Haaland, and Argentine striker Julian Alvarez will join Manchester City after the end of his loan period to River Plate this summer, according to the website. club official.