Many stores in Lebanon closed due to financial crisis 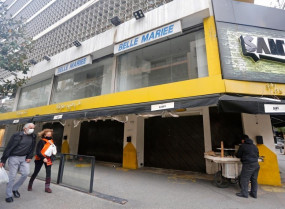 digital desk, Beirut. Lebanese merchants were hit by the country’s unprecedented economic and financial crisis in 2021, causing 35 percent of people to close their stores. This information has been given by the Beirut Traders Association.

Adnan Rammal, a representative of the business sector at the Economic and Social Council, told Xinhua news agency that a large number of merchants had to close their stores last year because they were unable to cover expenses due to a 50-plus drop in sales.

According to Rammal, the sectors that were hit the most include furniture, home appliances, electronics and carpets, with food demand also declining by 40 per cent during this period.

Over the past two years, the country has seen an unprecedented financial crisis amid a shortage of the US dollar, which has forced a massive depreciation of the Lebanese pound.

As a result of the collapse of the local currency, citizens saw a marked devaluation of their wages.

Most of them are employed in the public sector and are paid in the local currency, while only about 20 percent of them get their salary in US dollars.