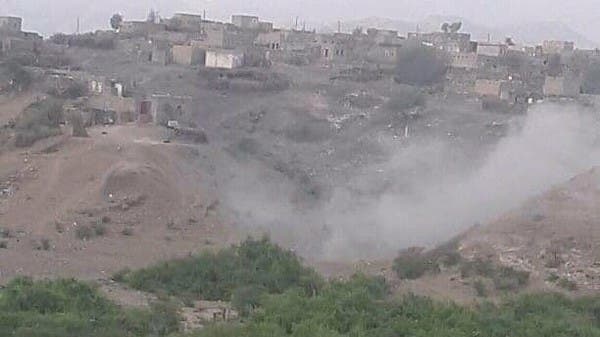 A government report said that the indiscriminate bombing by the Houthi militia on Rahba district led to the destruction of 28 homes and the forcible displacement of 261 families from the district, located southwest of Marib, northeastern Yemen.

The Executive Unit for the Administration of IDPs Camps in Marib stated, in a statement, that “the district of Rahba was subjected to systematic and deliberate shelling by the Houthis, which led to casualties among the displaced and the host community and the destruction of their properties and homes.”

The statement referred to the forced displacement of a number of families from the district to other areas in the governorate to escape the bombing with various types of weapons and missiles.

He explained that the number of displaced families during the past two days amounted to 261 families, representing approximately 1,827 displaced persons. The bombing also resulted in civilian casualties, between dead and wounded, in addition to the destruction of a number of homes and public and private facilities, according to what was reported by the “Yemen Shabab” website.

Remnants of the Houthi bombing of Rahba

The unit said that “the indiscriminate and intense bombing of the Rahba district by the Houthi militia is still going on, which leads to the continued displacement of families residing in the targeted villages in the district.”

It indicated that the Houthi shelling with missiles and drones on residential areas led to the burning and destruction of 28 homes, killing two civilians, including a 75-year-old, and wounding 9, including 5 women and a child. The bombing of the areas of displaced persons and civilians also resulted in the killing of two civilians and the injury of 12 persons, including 4 women.

The unit called for the legal documentation of all violations against the displaced civilians, women and children, and the filing of criminal cases against the perpetrators of such violations, demanding that violators of the rights of the displaced be prosecuted and included in the lists of war criminals.

Damage due to Houthi shelling on Rahba

In the same context, the human rights organization “Rights Radar” confirmed, yesterday, Saturday, the destruction of dozens of houses in the villages of Rahba District, as a result of the indiscriminate bombing of the district by the Houthi militia.

In tweets on its Twitter page, the organization called on the concerned authorities in the local authority in Ma’rib governorate and international and local organizations to accommodate more than 145 families who were forced to flee as a result of the indiscriminate bombing by the Houthi group on the villages of Rahba District.