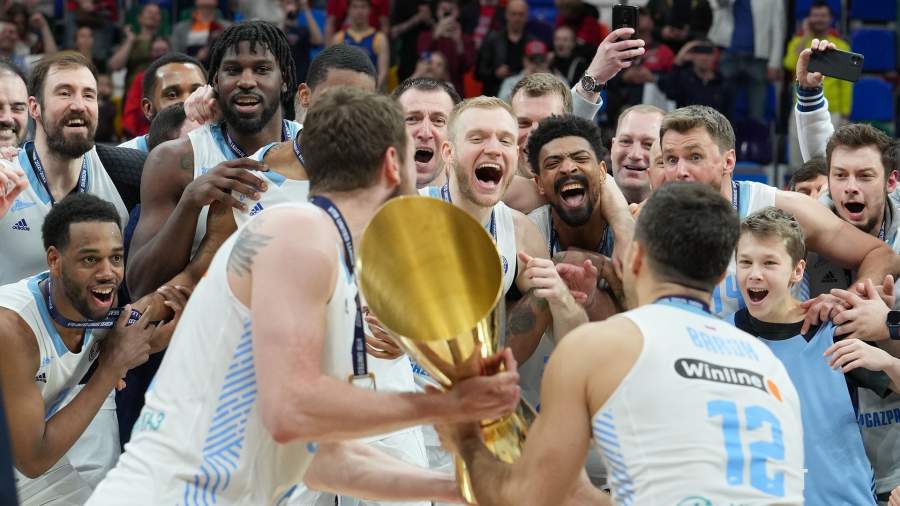 Zenit defeated CSKA in the decisive seventh match of the final series of the VTB United League (82:63, 4:3 in the series). The game was held in Moscow with a deafening full house – 12.5 thousand people. All tickets were sold out a day before the match, many who wished could not get into Megasport. And both teams did not disappoint. They produced the best match of the year, which was accompanied by numerous comebacks, injuries, suspensions and an incredible ending. As a result, CSKA’s series of 18 victories in a row in the Russian championship was interrupted. Now there is a new champion in Russian basketball, and the head coach of the army team, Dimitris Itoudis, is leaving his post in the status of the most successful club coach in modern history.

In the first quarter of the decisive match, CSKA made a bet on long-range shots, but the implementation failed – only three out of eight. Zenit played more diversely, constantly involving Jordan Mickey and Alex Poythress. The latter was so charged for the decisive match that he took rebounds through Nikola Milutinov and scored crazy dunks, one of them after the transfer of Mika in the fall. The first ten minutes was left for the guests, but CSKA was ready to return at any moment.

But Vitaly Fridzon, who stepped onto the floor, made numerous fans of the army team calm down for a while. The titled forward made an interception and scored a three-pointer. Zenit took the lead by 10 points (32:22). Aleksey Shved answered with two losses in a row, and Dimitris Itoudis decided on an extraordinary move – he removed Shved and Nikola Milutinov from the game, and a small five appeared on the floor – Jonas Jerebko acted on the fifth number. This went on for about four minutes, and ended with an attack, where the guests took four offensive rebounds in a row and after finishing Mickey reached the maximum difference (42:27).

On this, the experiment of the Greek specialist ended, and Shved and Milutinov reappeared on the floor. And here CSKA found the strength to reverse the spurt. The Swede scored 10 points in four minutes, and Nikita Kurbanov and Semyon Antonov cemented the defense. Yes, and blue-white-blue helped stupid losses. Late in the first half, Casper Ware hit an ultra-long three-pointer in the final second of possession. From the advantage of “Zenith” there were two points left, and the game began anew.

Pascual was indignant: his guys believed in success early. Such an experienced team as CSKA punishes for this. The third quarter began with a 6-0 rush by the hosts, and Zenit could not score for almost four minutes. The tension increased to the limit. The stands turned on at full power – each attack of the guests was met with a deafening whistle.

Pascual’s move and farewell to Itoudis

But this did not help the army team. An accurate three-pointer by Jordan Loyd – and only one point remained from the advantage. And then there were two key moments of the match. Three minutes before the end of the third quarter, Poythress received a fourth foul for a misplaced screen on Ware. The replay shows that Alex did not break the rules. Xavi Pascual lost his temper so that he fell on the referee Yaroslav Oreshkin. Having received first a technical, and then a disqualifying foul.

The Spanish coach went to the sub-tribune room, and the assistant Inyago Zorzano remained in charge of the team. Without their leader, the blue-white-blue lost the end of the quarter, but six points is not a sentence.

– The removal of Pascual played a role, – Zenit forward Sergey Karasev said in an interview with Izvestia. I think he cooked it. This motivated the team and we rallied even more.

In addition, in one of the episodes, the Swede received a fracture of the hand and could no longer continue the game. Without their main sniper, CSKA failed to score in the starting two minutes of the final quarter. “Zenith” made a breakthrough 7:0, and Antonov received an unsportsmanlike foul on Miki. Jordan increased his team’s lead to four points, and CSKA quickly ran out of team foul limits. There were still six minutes left to play – plenty of time for the game to turn over three or four more times. But without the Swede, CSKA looked doomed in attack. Only four points in 6.5 minutes – it was a failure.

Itoudis took a time-out at minus 7. But the very first attack after him ended with an interception by Karasev, and then a three-pointer by Denis Zakharov (it’s nice that the Russian players come to the fore in key minutes). The advantage of the guests has already grown to 9 points, and Itoudis decided to use the last time-out 2.5 minutes before the end. Then strange things happened. Clyburn missed from the free-throw line, Poythress fought like a lion with four fouls (delivering a delicious block shot to Antonov), Ware again scored from a hopeless situation and gave the fans hope (75:78). Until the end of the match was 25 seconds. “Zenith” went to his last attack. CSKA promptly fouled Loyd. The NBA champion scored two free throws and brought his team gold in the VTB United League.

“Great emotions,” Andrey Kirilenko, President of the Russian Basketball Federation, shared with Izvestia. – Equal two teams that performed well in the Euroleague. It is no wonder that they met in the final and brought the matter to the decisive seventh match. To be honest, I’m impressed with the character of Zenit. Winning a series against CSKA losing 1:3 is very difficult. And they won two matches in Moscow. We did it absolutely according to the game, so we deserved the title 100%.

After the match, Dimitris Itoudis announced his departure from CSKA. The Greek coach will continue his career at Fenerbahce.

“I know that Dimitris really wanted to win and leave beautifully,” CSKA President Andrey Vatutin told Izvestia. – Nevertheless, it is not always possible to take the title on order, although we were leading in the series with a score of 3:1. It’s not always easy to leave gracefully. But it is not always necessary to remember only the last match. We must remember the eight years he spent at CSKA. How dedicated he was to the team. How devoted he was to what he loved. So only good impressions about Dimitris. I can thank him again. He entered his name in the history of the club in golden letters. I wish him good luck in his future career.

With the army team, Itoudis won the Euroleague twice (2016, 2019) and six times in the VTB League (with the exception of 2022, in 2020 the champion was not determined due to the coronavirus pandemic).