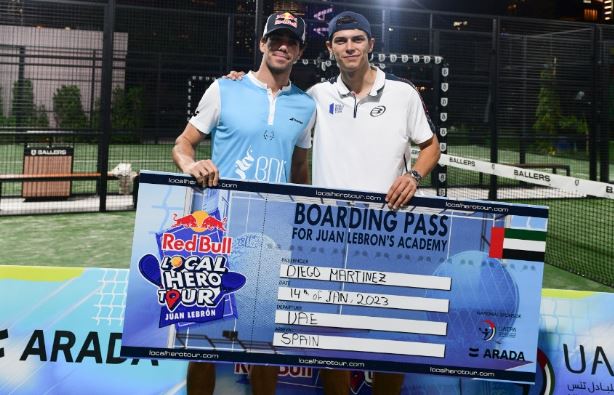 Diego Martinez won the Red Bull Local Hero Tour UAE Finals, a unique tournament held in the UAE for the first time. The winner was chosen for obtaining the highest number of points during the tournament, which was held under the supervision of the world champion in paddle sport, Juan Lebrun, world champion 9 times.

Martinez will go through an unparalleled experience, which is an all-expenses-covered trip to a unique training experience at the Juan Lebron Academy camp in the Spanish capital. The championship qualifiers, which were held in four stages, started in Ajman, where the competitions were held on the “Padel Square” stadiums last Tuesday, and moved the next day to the “Let’s Paddle” Academy in Abu Dhabi. The last two stages of the qualifiers were held in Dubai over two days, on The courts of the “Let’s Paddle” Academy last Thursday, and the International Padel Tennis Academy last Friday, and the “Poolers” Center in Dubai also hosted the national final on Saturday, January 14th.

The tournament allowed padel enthusiasts and promising skills to get acquainted with the world champion, LeBron, and receive advice and guidance from him, as he supervised the qualifiers that were held during the tournament.