Maxwell taking a selfie with the young cricketers: A classic act by the Big Show 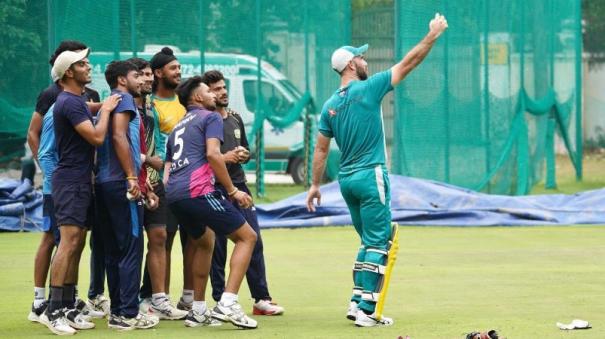 Mohali: Glenn Maxwell, the action all-rounder of the Australian cricket team, happily took a selfie with the young players. It is noted that he is playing for Royal Challengers in IPL cricket.

The Australian cricket team is going on a tour of India to play a 3-match T20I series. The first match of the series will be played tomorrow at the Punjab Cricket Association Stadium in Mohali. For that, the players of both the teams are camping and training there.

With the T20 World Cup series coming up next month, this series will be a good practice for both the teams. Australia’s Maxwell, who was practicing nets in this environment, enjoyed meeting the young Punjab cricketers. He also took a selfie with them.

Fans used to call him Big Show. He has played 14 Tests, 127 ODIs and 87 T20Is for Australia. He has scored 2017 runs in international T20 cricket. He has also taken 36 wickets. He approaches the cricket ball in an unusual switch-hit manner. So it is a bit difficult for him to bowl and set the field.