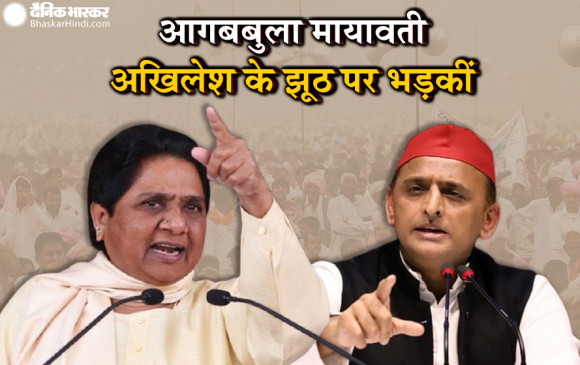 Lucknow, June 16 (IANS) Bahujan Samaj Party chief Mayawati on Wednesday targeted the Samajwadi Party. Denying the break in the party, he said, Samajwadi Party, which specializes in the narrow politics of hate manipulation, malice and casteism, is propagating with the help of the media that some BSP MLAs are breaking into the Samajwadi Party. This is a gross hoax.

In a tweet on Wednesday, Mayawati said, “These MLAs have been suspended long ago from the BSP for defeating the son of a Dalit in the Rajya Sabha elections in connivance with the SP and an industrialist. The talk of break in BSP is absolutely a hoax. At the same time it has also been instructed that Akhilesh Yadav should stop spreading lies.

Mayawati also gave a stern warning, taking a jibe at the SP in five consecutive tweets. He said, had the SP been even a little honest with these suspended MLAs, it would not have kept them in limbo till now. They know that if these BSP MLAs are taken, there will be rebellion and split in SP, who are eager to join BSP.

BSP President Mayawati said, it is well known that SP’s gait, character and face have always been anti-Dalit, in which they are not ready for even the slightest improvement. For this reason, in the SP government, the works of public interest of the BSP government were stopped. Especially for making Bhadoi a new Sant Ravidas Nagar district, it was also changed, which was a very condemnable step.

BSP President Mayawati reiterated in her last tweet, SP’s new drama on Tuesday to publicize in the media about meeting suspended MLAs of BSP etc. Maneuver for election of president and block chief after Panchayat elections in UP Looks like too much. BSP has emerged as a party of people’s aspirations in UP, which will continue.

It is to be known that on Tuesday, the revolt in the BSP heated up the political atmosphere of the state. 11 MLAs suspended from BSP, showing solidarity, are thinking of forming a separate party under the leadership of Lalji Verma. Five rebel MLAs met SP National President Akhilesh Yadav in Lucknow yesterday. Of the total 18 MLAs in the BSP, nine have been suspended by the party and two have been expelled.

The MLAs who went to meet Akhilesh Yadav at the SP office in Vikramaditya on Tuesday were led by Aslam Raini, MLA from Shravasti. He claimed that soon he would form a new party under the leadership of Lalji Verma, who was recently expelled from the BSP. The party has 11 MLAs with him.