Mbappe: I’m not the best player in the world… I’m still hungry for football 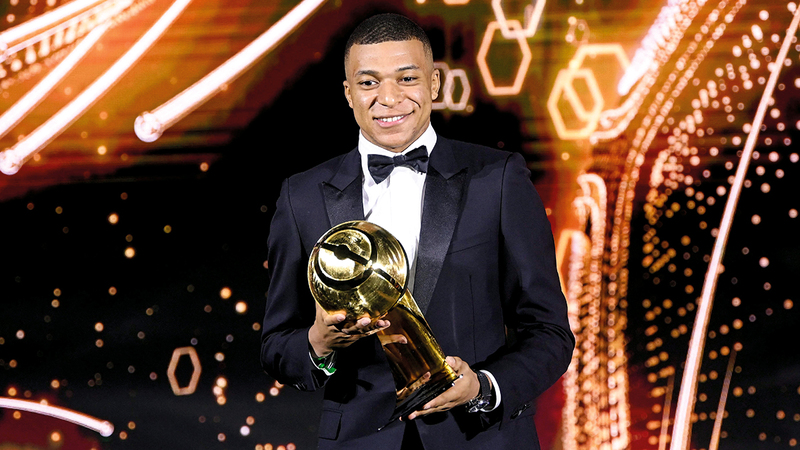 The scene of French star Kilian Mbappe winning the “Dubai Globe Soccer Awards 2021”, as the best player in the world, the day before yesterday, the memory of the Emirati fans back 10 years ago, when a picture was taken of him at Al Ain Club, accompanied by his brother, the former leader player Kimbo Ikoku, without being asked. They realize that this young boy will be crowned with the title of an international award, expressing his artistic value.

Mbabbi (23 years old), is achieving one dream after another. From a young player of the age of roses, who is following his professional brother in the UAE league, to technical maturity at a record speed, and with an overwhelming desire to become the best player in the world, with the testimony of more than five million fans who voted for him to win the “Dubai Globe” award. Suker.

Mbappe commented on his strong will and the beginnings of his career towards stardom, and said in press statements on the sidelines of his participation in the 16th edition of the Dubai International Sports Conference, that passion did not overcome him when he left his family at the age of 12 to join the French Academy of Monaco, adding: “I was thinking about One goal, and I play football in any way and means, I was not concerned that it would be a reason for me to get a job or make money from it. My only goal was to become a footballer.”

He continued, “I advise every young player not to be affected by any difficulties he faces. Children and young people must present their talent to everyone, and not wait for someone to help them or lend them a helping hand.”

He continued: “I have achieved many things in football, including winning the World Cup, but until now I have not reached everything I aspire to now. ».

On his expectations of what the French team can achieve in the next World Cup 2022, which is the holder of the 2018 title, Mbappe said: “Winning the World Cup has become part of the past, it should not be a permanent memory in our professional life, but rather it should represent a new challenge, we will not go to the World Cup.” 2022 and we are satisfied that we are the title holders, but we will go to Qatar to challenge Italy, Germany and other big teams to win the title.”

On the sidelines of the conference, the Dubai Globe Soccer Ceremony was held, which witnessed the honoring of 13 football personalities, organizations, clubs and teams, most notably Mbappe, Robert Lewandowski, Ronaldinho, and the famous coach Mancini.

For its part, the Dubai Sports Council said in a press statement that more than one billion tracked the news and photos of the Dubai Sports Conference and the Dubai Globe Soccer Awards, which was held the day before yesterday, in the “Burj Khalifa”, under the slogan “The Forum of the World”, through social media.

Many international football stars who attended the event as guests from inside and outside the country, or who were honored, expressed their happiness at attending this annual event, which is an opportunity to meet the various actors in world football, including administrators, players and coaches, and to review the reality and future of football. It also celebrates the creative players who have achieved the honor of winning this award.

Social media also caught fire with news and comments on the event from official and unofficial accounts, in more than 200 countries around the world, including the accounts of participating and winning stars and clubs, whose followers exceed one billion followers, on the platforms “Instagram, Twitter, and Facebook”, who Watch videos and photos of the annual event.

The coach of the Italian national football team, Roberto Mancini, has nominated Manchester City to win the European Champions League in its current version.

On the sidelines of his attendance at the Dubai International Conference and the Dubai Globe Soccer Awards, Mancini said that the reality confirms that Manchester City is the team most likely to win the Champions League, because, in my opinion, it is the best team in the world.

He added, “I worked for a while with this club, and I won the Premier League title after 50 years of absence. and organized.”

On Italy’s award for the best team in the world, Mancini said, “It is a good thing for me, the players, the technical and administrative staff, to be present in Dubai. To obtain this award, we did a great job in the European Nations Championship, and we were able to obtain the title, and this work counts for the players in First of all, to whom I would like to thank for this great work.

Lewandowski: Thank you to all the fans who voted for me

The winner of the TikTok Fans’ Choice Player of the Year award and the best goal, Bayern Munich star and Poland captain, Robert Lewandowski, said on his account on “Instagram”: “It is always a pleasure to be here in Dubai, and to meet many friends. And great players, thank you very much for the awards, they are very valuable to me, thank you to all my fans who voted for me, I would like to dedicate these awards to young athletes around the world, remember that in order to achieve success, you have to recover time and time again from your failures, and continue Fight for your dreams, congratulations to all the winners, I wish you all the best for next year 2022.”