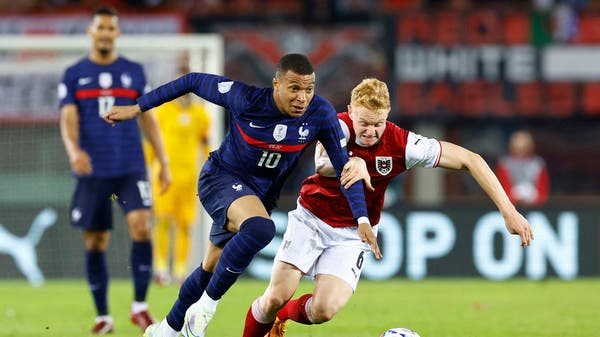 Substitute Kylian Mbappe saved the world champion and defending champion France from a second defeat in three matches he played so far in the first group matches of the first level of the European Nations League, by snatching a 1-1 draw against Austria on Friday in Vienna.

After an opening defeat in its stronghold, Stade de France, against Denmark 1-2, after it was the first to score, France was satisfied with a 1-1 draw with Croatia, its runner-up in the 2018 World Cup. When I lost 1-3 in the 2010 World Cup qualifiers.

But Mbappe, who missed the Croatia match due to an injury he suffered against Croatia, spared coach Didier Deschamps’ team a second defeat by snatching a equalizer in the 83rd minute of the match after entering the second half.

France raised its score to two points, but became at the bottom of the group after Croatia beat its host Denmark with a goal scored by Mario Pasalic in the 69th minute after a corner kick, raising his country’s tally to 4 points, compared to six for its Scandinavian host, who remained at the top, and four for Austria, which made a successful start with its new coach. German Ralph Rangnick.

This international window concludes with a fourth round on Monday, where France will face Croatia in the “Stadium de France”, and Austria will meet with Denmark in Copenhagen, after beating its opponent 2-1 in Vienna during the last round.

France played the match with a different squad than the one that drew with Croatia in the last round, as Deschamps gave the opportunity to Liverpool defender Ibrahima Konate to start, six days after he was called up for the first time in order to compensate for the absence of Raphael Varane, while William Saliba played a key beside him for the second match in a row in His fifth call-up to the national team.

Midfielder Arilian Chuamini, who is likely to move from Monaco to Real Madrid, kept his place for the third consecutive match, while Karim Benzema returned to the attack to play against Antoine Griezmann after Deschamps kept them on the bench against Croatia, while Kylian Mbappe remained outside the starting lineup.

The world champions were close to opening the scoring with a double chance after a free kick by Griezmann, which was blocked by goalkeeper Patrick Bentes, who came back and stood in the face of Benzema’s vertical follow-up (18).

But that was the only opportunity for the guests before the Austrians responded with a beautiful three-way game between Marko Arnautovic, Konrad Laimer and Andreas Weimann, who finished it in the net against the captain, who returned to the squad Hugo Lloris (37).

France almost entered the two-half break, at the same distance from its host, had it not been for the brilliance of goalkeeper Bents in a spiral shot for Benzema (43), and then he repeated the same thing at the beginning of the second half when he blocked an attempt by Benjamin Bavar (55) followed by Kingsley Coman with a shot over the crossbar, although he It was in a convenient place to record (56).

Deschamps resorted to Mbappe in the 65th minute in search of offensive solutions at the expense of Griezmann, at a time when Rangnick had to take out the Spanish champion of the Champions League, Real Madrid, David Alaba due to injury (69).

Despite complete control, which reached the limits of eighty percent, France seemed unable to reach its host’s net until the 83rd minute, when Mbappe managed to snatch the equalizer after a pass from Konate.