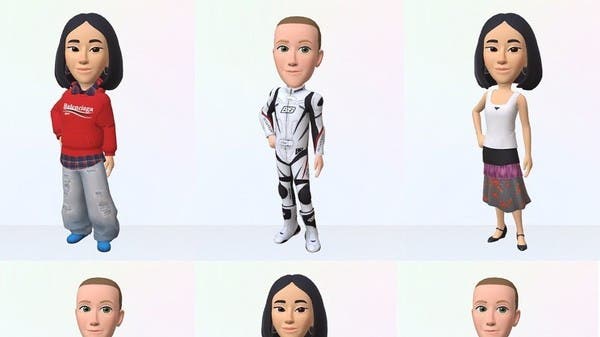 Meta, the owner of Facebook, Instagram and Messenger, has revealed the launch of its first digital fashion store, Avatars Store. This store brings luxury within reach by offering designer Balenciaga, Prada and Thom Brown designs.

It is expected that digital fashion will make luxury clothes easier to obtain, and if it does not allow it to be worn and flaunted on the street, it will make this possible on social networks and in “Metaverse”, by choosing luxury designs worn by avatars or “avatars” in the world. default.

This project is currently being worked on by Meta, whose CEO Mark Zuckerberg announced the launch of its first digital clothing store.

The announcement was made via a live broadcast on Instagram, in which Zuckerberg appeared alongside Eva Chen, who is the vice president of the fashion department at Meta. In this context, we have announced the launch of a new interface for selling designs for avatars or “avatars” for users of Facebook, Instagram, and Messenger, without canceling the current free clothing options available on them, and that this new store will start working this week in several countries, including the United States.

At first, users will be able to get signature outfits from Balenciaga, Prada and Thom Brown who have already tested some of the possibilities of the Metaverse universe. However, the prices of these digital clothes have not yet been revealed, and the store is expected to be enriched with fashion and accessories bearing the signature of other international houses.

The first photos released by Zuckerberg and Eva Chen are of the two avatars wearing Balenciaga jumpsuits and hoodies, as well as Prada outfits and select designs from Thom Brown previously worn by celebrities at the recent Met Gala. “Digital goods will become an important means of expression in metaverses and a major driver of the creative economy,” Zuckerberg said.

It seems that the interest of the international role in the field of fashion is no longer limited to non-fungible tokens or NFTs, but also to the launch of digital fashion. The first steps in this field were taken by brands such as Gucci, Balenciaga, Nike, and Tommy Hilfiger, who collaborated with famous digital gaming platforms such as Roblox, Zepeto, and Fortnite to launch designs bearing their signature, so what developments will the future bring for us in this field?