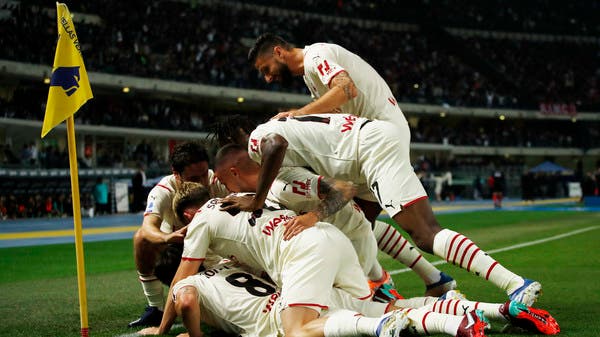 Milan regained the top spot in the Italian football league, after overturning a goal behind against its host Verona to win 3-1 during the match that brought them together on Sunday in the thirty-sixth round of the competition, which also witnessed Cagliari’s 1-1 tie with Salernitana, and Atalanta’s victory over Spezia. 3-1, and Venezia 4-3 Bologna.

Verona advanced with a goal scored by David Faraone in the 38th minute, before Milan scored three goals through Sandro Tonali (two goals) in the third two minutes of overtime in the first half and 50, and Alessandro Florenzi in the 86th minute. Milan raised its score to 80 points to regain the top spot, Which he lost to Inter Milan after beating Empoli 4-2 on Friday, on the other hand, Verona’s balance stopped at 52 points in ninth place.

In the second match, Cagliari maintained their chances of staying in the Italian league after they drew 1-1 with Salernitana. Simone Verdi scored a goal in the 68th minute through a penalty kick, and Giorgio Altari equalized Cagliari in the ninth minute of stoppage time. In the 69th minute, Franck Ribery of Salernitana was sent off.

In the third match, Venezia kept their chances of staying in the difficult league against Bologna 4-3.

The goals of Venezia were scored by Thomas Henry in the fourth minute, Sofiane Kieni in the 19th minute, Mattia Aramo in the 78th minute from a penalty kick, and Dennis Johnson in the third minute of overtime for the match.

Meanwhile, Bologna’s goals were scored by Riccardo Orsolini in the last minute of the first half, Marko Arnautovic in the 55th minute and Jerdi Schuten in the 68th minute.

Veneza raised his score to 25 points in the last twentieth place, five points behind the safe zone. While Bologna’s balance stopped at 43 points in thirteenth place.

In the fourth match, Atalanta beat its host Spezia 3-1. Atalanta’s goals were scored by Luis Muriel, Berat Demsetti and Mario Pasalic in the 15th, 73rd and 87th minutes, while Spezia’s goal was scored by Daniele Verdi in the 30th minute. Atalanta raised its score to 59 points in seventh place, and the balance stopped Spezia at 33 points in 16th place.