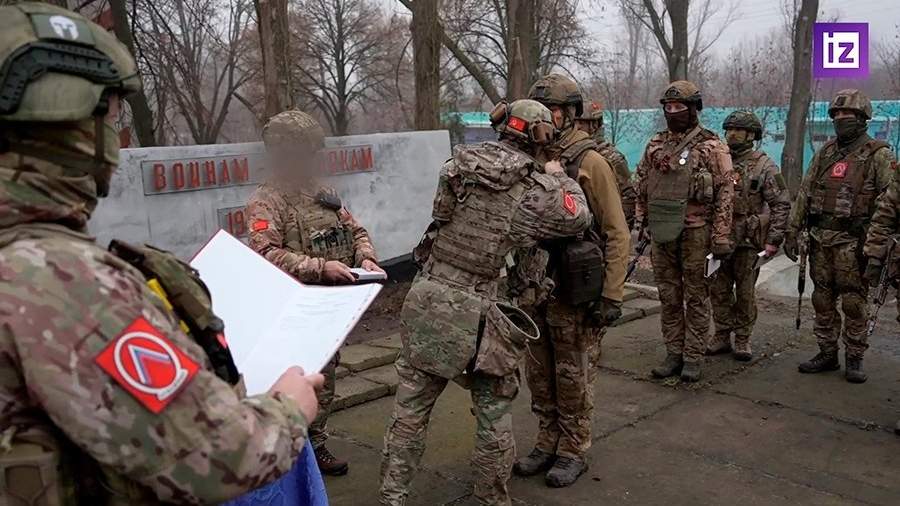 Servicemen of the Special Forces Unit of the Central Military District (TsVO) received state awards for heroism, courage, bravery and dedication shown during a special military operation. The awarding took place close to the line of contact with the enemy, the Ministry of Defense reported on Sunday, January 1.

Orders of Courage, medals “For Courage” and the insignia of the St. George Cross were awarded to officers, sergeants and enlisted personnel of the unit. The awards were received by contract servicemen and those called up for mobilization.

“Let me congratulate you on this high award. Dear comrade military personnel, we hope you will fulfill your military duty at the same pace, with the same courage and courage, ”advised the senior fighters.

The decorated commander with the callsign Desna said that the group was given the task of moving into the forest to support another group. As soon as they entered the forest, they were met by dense fire from enemy machine gunners. The fight has begun. The second group retreated to the right, and Desna and his colleagues waited for some time and, closer to the morning, went to the desired area.

“There, the enemy repeatedly tried to knock us out. There were shelling with a mortar, tanks. We held out, outflanked the enemy and drove him out of position. The forces were unequal initially – the enemy had about 100 people, the forest was small, the positions were prepared. They were waiting for us. The forest is dense, it was very difficult to conduct hostilities, ”he said.

The scout with the call sign Shmel, talking about a feat worthy of a state award, shared that his group received the task of advancing to a certain area to contain the enemy and then squeeze him out of positions in the forest. Moved out at night. The enemy partially noticed them, began to fire from a machine gun.

“But we, like true scouts, nevertheless made our way into this array, entrenched ourselves. In the morning we moved to the designated area, where the enemy was 30-50 meters from us. More than half of the territory was liberated on the first day, then artillery began to work, a wandering tank, mortars, copters dropped grenades. They took one prisoner who agreed to surrender from among the survivors. He told which unit and brigade, how many retreated, how many remained. According to him, most simply fled, retreated to safe positions, the rest were destroyed, ”the scout described the operation.

Lieutenant Colonel Dmitry Zharkikh, who was awarded the Order of Courage by Russian President Vladimir Putin on December 31 at the headquarters of the Southern Military District, said after the ceremony that he was confident in the rightness of his cause. He congratulated the comrades-in-arms, who also received high state awards from the hands of the head of state.

An employee of the medical service of the 71st regiment, Anna Sidorenko, who received an award from the President of the Russian Federation, spoke about her impressions of the meeting with the leader of the country. According to her, Putin’s visit to the headquarters of the Southern Military District was unexpected for everyone.

From February 24, 2022, the Russian Federation continues a special operation to protect Donbass, against which Kyiv has been conducting military operations since 2014.