Minister of Islamic Affairs: We succeeded in correcting the path of the call and confronting extremism 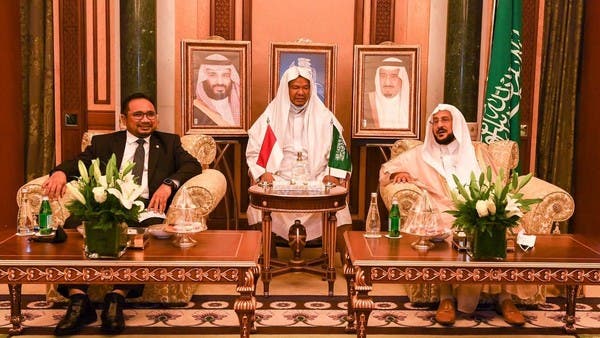 The Minister of Islamic Affairs, Call and Guidance Abdullatif Al-Sheikh confirmed that Saudi Arabia has succeeded in controlling and correcting the path of preaching and confronting extremism.

He said that the preaching platforms in Saudi Arabia are going in the right direction, pointing out that these platforms play a major role in educating society and confronting groups that try to exploit Islam for partisan objectives.

This came during a session of official talks in Jeddah, with the Indonesian Minister of Religious Affairs Yaqut Khalil Qamas, who is currently visiting Saudi Arabia.

At the beginning of the session, Minister Al-Sheikh reviewed the efforts made by the government of the Custodian of the Two Holy Mosques, in the areas of serving Islam and Muslims, spreading the values ​​of moderation and correcting the understanding of religious discourse.

The minister also reviewed the government’s efforts to print the Noble Qur’an through the King Fahd Complex in Madinah, in addition to the efforts made by the Kingdom in confronting the Corona pandemic and serving the Two Holy Mosques and serving their visitors.

He stressed that the Ministry of Islamic Affairs has concluded memoranda of understanding with a number of Islamic ministries and sheikhdoms in countries of the world to convey the Kingdom’s experience in the areas of serving Islam and in order to spread its tolerant values ​​and teachings in line with the policy and message that the Kingdom undertakes towards Muslims around the world.

He also valued the distinguished cooperation between Saudi Arabia and Indonesia in various fields, including Islamic affairs, to achieve visions and aspirations and everything that achieves security, progress and advancement for the two countries, hoping that the efforts made by the two ministries will result in achieving what the supreme leadership in the two countries aspires to.

For his part, the Indonesian Minister of Religious Affairs praised the efforts of Saudi Arabia, led by the Custodian of the Two Holy Mosques and the Crown Prince, to serve Islam and Muslims in the world and Muslims in Indonesia in particular, stressing that Saudi Arabia is taking great strides to spread the approach of moderation and moderation that Muslim peoples need in the world.

And he indicated that Indonesia is proud of what Saudi Arabia offers to Islam, Muslims and humanity as a whole, pointing to the keenness of the Ministry of Religious Affairs in his country to activate agreements for cooperation in everything that serves Islam and Muslims, especially since this cooperation is with the countries of the Two Holy Mosques that serve Islam and Muslims in the world.

The minister praised the efforts provided by Saudi Arabia to pilgrims and pilgrims and everyone who comes to the Kingdom with the intention of visiting, stressing that the Kingdom’s experience in dealing with the Corona pandemic is distinctive and reflects the awareness and keenness of the Kingdom’s pioneering leadership.