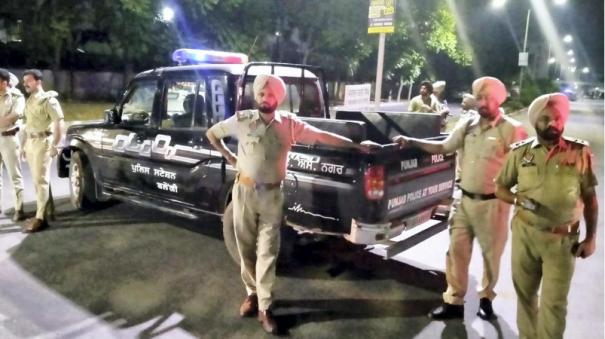 The head office of the police intelligence service in Mogali, Punjab, was hit by a missile yesterday morning. No one was injured. Only part of the office building was damaged.

There have been previous grenade attacks in Punjab. It is worrying that this is the first time an RPG missile attack has been carried out. This missile can be launched from the shoulder of an individual. We are investigating the terrorist organizations behind this attack. The Taliban, who rule Afghanistan, are the largest users of RPG missiles.

Numerous weapons were dropped when US coalition forces withdrew from Afghanistan. Those weapons are being used by the Taliban. US and British weapons seized during recent encounters in Kashmir.

It is currently suspected that the Taliban used an RPG missile in the Mogali attack. We are conducting a serious investigation in this regard.

A high-level consultative meeting chaired by Punjab Chief Minister Bhagwant Mann on the Mogali attack was held yesterday. The Chief Minister directed the police authorities to take immediate action to find the culprits.

Punjab police are investigating the attack. Examination of CCTV camera recordings revealed that a car was parked suspiciously. 2 people have been arrested on this basis.

The Sikh system is responsible

In a video released by Gurbatwant Singh Pannu, general adviser to the Justice for Sikhs (SFJ), he said, “We attacked the police intelligence headquarters in Mogali. We will retaliate against the Sikhs with chants, ”he said.