Modric and the mockery of opponents.. Salah is the last victim 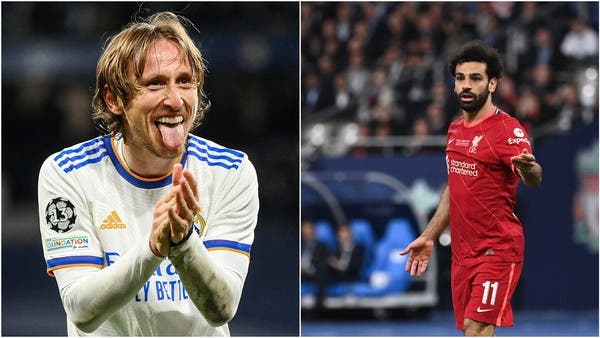 Luka Modric, the captain of the Croatia national team and the star of Real Madrid, has long been known for his mockery of opponents and players, whether with his provocative statements or his actions on the field, up to his use of pictures through his official accounts on his social networking sites, and Mohamed Salah, Liverpool’s top scorer, was the last victim of the adult player from Age “36 years”.

Rodrygo during the interview

On Friday, Brazilian Rodrigo Goes, the Real Madrid winger, revealed his colleague Mordic’s provocation of the Egyptian star Mohamed Salah, after the Champions League final, saying: I have to tell a funny story, when the final match ended, we made a corridor for Liverpool players, Salah passed frustrated And Modric greeted him, and said to him: Well, well, you have to try again.

Salah and Mbappe in the 2022 Champions League final

Luka Modric’s behavior with Salah came after the latter threatened Real Madrid more than once in television statements and through social networks, stressing that he wanted to face Real Madrid to avenge the defeat of the 2018 Champions League final in Kyiv, before losing the continental title for the second time against the capital club. The Spanish club, which raised its score to 14 titles, as the most crowned club in the Champions League.

Paris Saint-Germain player Kylian Mbappe did not escape Modric’s comments, after the French player rejected Real Madrid’s offers and recently extended his contract with his club to 2025.

And the story returns, when Modric was asked about his future with Real Madrid, especially since his contract was expiring on June 30, and the midfielder confirmed in a television interview that he wanted to extend his career at the “Santiago Bernabeu”, and he ruled out simulating Mbappe and making a sudden decision, explaining: I did not renew Yet, but I wouldn’t do like Mbappe, I’ve said many times that I want to end my career here.

He added: “We have the Champions League final, which is the most important thing ever, and Real Madrid is above any player, and the players in Madrid are becoming great stars.”

In April 2021, the 2018 Ballon d’Or winner mocked Gerard Pique, Barcelona defender, after the end of the “Clásico” in the Spanish League, where Real Madrid won two goals against a goal in the match hosted by the “Alfredo Di Stefano” stadium.

The cameras captured Modric’s conversation with Pique after the end of the match, as Pique wanted to speak with the referee to object to the time calculated instead of lost.

The Croatian told the Barcelona defender at the time: “Now it’s time to protest, isn’t it?”

Pique replied: Oh man, only 4 minutes, and Modric sarcastically tells him: How much do you want then? Before heading to the dressing room, laughing in a clear and sarcastic manner.

After the Clasico, Luka Modric also responded in a sarcastic way to Jurgen Klopp’s statements, Liverpool coach, regarding his statements against the “Alfredo Di Stefano” stadium, which witnessed the English team’s loss to Real Madrid by three goals to one, and then described it as the training ground, with Pique’s comment.

Mordic responded to Pique and Klopp’s comments: Nothing they do abroad can taint our history, there are always complaints, and that’s normal, we are the best club in the world, and they do not tarnish our image at all.

It is noteworthy that Real Madrid was playing its matches at the “Alfredo Di Stefano” stadium during the outbreak of the Corona virus, due to the maintenance work that was at the “Santiago Bernabeu” stadium.

Modric did not forget the night that Real Madrid was humiliated by young players in Ajax Amsterdam, when the Dutch club eliminated Real Madrid from the 16th round of the 2019 European Champions League, and by four goals in the second leg, which was held at the “Santiago Bernabeu” stadium.

The evening witnessed a wonderful dribbling by Frenkie de Jong of his Croatian rival, and the young Dutchman published a picture through his accounts on the social networks, showing the fall of Modric and his colleague Vinicius on the field, after he succeeded in evading Modric.

The Real Madrid player waited for nearly 5 months to respond to De Jong, who moved to Barcelona, ​​and Real Madrid managed to beat the Catalan club 3-1 in October 2020, in the seventh round of the Spanish League in the match that was held at the “Camp Nou”.

Modric entered the second half and scored the third goal in a wonderful way, and celebrated after the match by publishing a picture through his account on “Instagram”, and according to the Spanish “Definsa Central” website, Modric chose the image carefully, to respond to the provocation of his opponent, Frenkie de Young.

The photo, published by Modric, shows De Jong and the Barcelona goalkeeper

Modric has always been in arguments with Vidal, who played against Real Madrid many times, and in late May 2019, Luca spoke about the achievements of the Chilean team in the Copa America, and made television statements when asked about the chance of Chile winning the Copa America, and he said with a laugh: “We won three championships. Champions League in a row, they can win three Copa Americas, so why not.

On Vidal, he added: “I love this type of player, he is an excellent player, he has had and still has a great career and will definitely continue.”

Modric’s comments shocked the Chilean fans, according to the newspaper “Defensa Central”, which commented: It is not known whether his words were sincere or mocking.

Vidal and Modric in a previous Champions League match

It is noteworthy that Vidal had bid farewell to the Champions League three times in which Real Madrid won the title in a row, the first time when he was a Juventus player and exited from the semi-finals, and the second and third time with Bayern Munich, from the quarter-finals and semi-finals as well.

The atmosphere between Real Madrid and its rivals in the capital, Atletico, flared up at the end of 2018, due to statements made by Argentine coach Diego Simeone, who questioned the eligibility of Luka Modric to win the Golden Ball award at the expense of his player in the team, Antoine Griezmann.

Modric said in an interview with the Croatian newspaper “Sportsky Novosti”: I understand Simeone’s defense of Griezmann, and his belief that he is the best, but he feels a constant need to underestimate Real Madrid and his players, and he takes advantage of every opportunity to suggest that there are other reasons behind our victories, which is not true.

“It is unfair that our achievements, including the victory over Atletico Madrid twice in the Champions League final, turn into an ongoing theory about the existence of favoritism in favor of Real Madrid.”