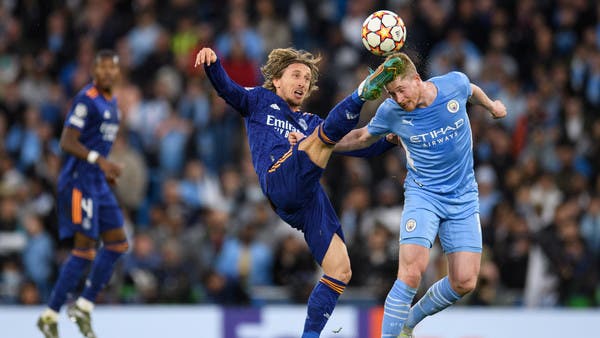 Real Madrid midfielder Luka Modric said that the match scheduled against Manchester City, England, on Wednesday, in the second leg of the semi-finals of the Champions League, is the most important match of the season.

A few days after Real Madrid won the Spanish League title in his favour, the focus turns to the Champions League, where Real Madrid is looking to turn the tables against its English rival, after the first leg ended with Manchester City winning 4-3.

“The atmosphere in the changing room is very good,” Modric said during a press conference on Tuesday. We are looking forward to the confrontation. And we know what we’re supposed to do, because this is the most important game of the season. We must give our best games.

“We have great confidence in the struggle to return,” he added. We know we didn’t perform at our best in the first game, but we scored three goals. We have to do better, and I’m sure we will. We have the competence and personality for it. Besides the history of this club.

As for Manchester City, last season’s Champions League runners-up, they had never won the European title.

“On Wednesday, it will be four years since our last Champions League victory, but this is another match, so we have to forget about that and focus,” Modric said.

“What we have to do, is to enter the field with a lot of confidence and character, a lot of energy and enthusiasm.” We have to show that we are Real Madrid, the best team in the world. We have to get the fans into the game right from the start with a good performance.