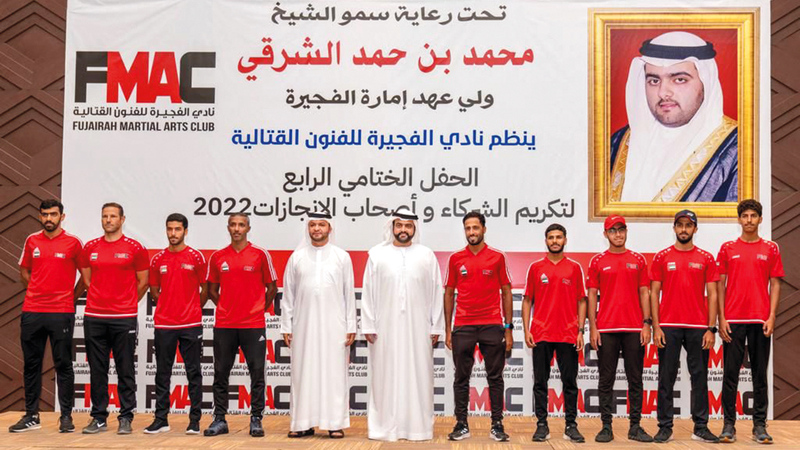 His Highness Sheikh Mohammed bin Hamad Al Sharqi, Crown Prince of Fujairah, stressed the role of sports clubs and institutions in activating the sports movement in the country, and the importance of holding competitions and sports games inside or outside the country in order to gain experience and achieve honorable results, pointing to the support of His Highness Sheikh Hamad bin Mohammed Al Sharqi, member The Supreme Council and Ruler of Fujairah, for sports activity in the emirate, which contributes to strengthening the state’s presence in the sports sector globally.

This came during the attendance of His Highness the Crown Prince of Fujairah, the fourth annual closing ceremony of the Fujairah Martial Arts Club, at the Novotel Hotel in Fujairah, during which he honored the partners and achievers.

His Highness praised the club’s efforts in organizing sports competitions and combat games throughout the year, which constitutes an incentive for athletes to actively participate and promote sports activity in the Emirate of Fujairah, and supports the state’s efforts in the sports sector in general, and self-defense games in particular, at the global level.

Brigadier Ahmed Hamdan Al Zeyoudi, Executive Director of the Fujairah Martial Arts Club, said that the position the club has reached thanks to the great support of His Highness the Crown Prince of Fujairah and the dedication of all its members, old and young, to provide the best results, pointing out that the future is the best and most beautiful. During the ceremony, His Highness the Crown Prince honored the partners supporting the club and its annual activities, and the owners of local and international sports achievements. His Highness also honored the distinguished players who achieved advanced positions at the level of international tournaments. The ceremony was attended by a number of directors of federal and local institutions.