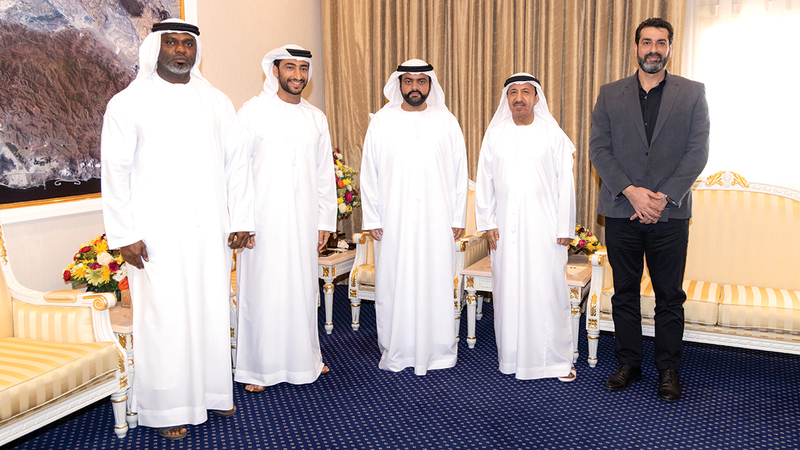 His Highness Sheikh Mohammed bin Hamad bin Mohammed Al Sharqi, Crown Prince of Fujairah, affirmed the international standing of the Emirate of Fujairah in hosting and organizing sports tournaments, noting the keenness of His Highness Sheikh Hamad bin Mohammed Al Sharqi, Member of the Supreme Council and Ruler of Fujairah, to provide resources supporting the success of sports events that enhance the attendance of The emirate is in the sports field locally and internationally.

This came when His Highness received, in his office at the Emiri Diwan, members of the Organizing Committee of the Fujairah International Bodybuilding Championship for “professionals”, in the presence of Sheikh Abdullah bin Hamad bin Saif Al Sharqi, President of the Emirates Federation for Body Building and Physical Strength, Vice President of the International Federation of the Game.

During the meeting, His Highness, the Crown Prince of Fujairah, was briefed on the work plan and details of preparation for the championship, which will be held under the patronage of His Highness during the period from 17 to 20 November at the Zayed Sports Complex in Fujairah, under the supervision of the International Federation of Body Building, and in cooperation with the UAE Game Federation.

The organizing committee reviewed the program of the games scheduled for the tournament and its approved categories, targeting a wide international participation of 1,200 professional players, both women and men, from different countries of the world.

His Highness the Crown Prince of Fujairah directed the organizing committee to intensify work and continue efforts during the coming stages to ensure the achievement of the goals of the tournament, stressing to harness the supporting organizational and logistical capabilities to enhance the reputation of the Emirate of Fujairah, and the UAE, in the sports field.

The members of the organizing committee of the tournament thanked His Highness, the Crown Prince of Fujairah, for the reception and his patronage of this important event, which constitutes a qualitative addition to the Emirate of Fujairah’s record in international sports forums, stressing the continuation of work to achieve the desired honorable results.

The meeting was attended by Salem Al-Zahmi, Director of the Office of His Highness the Crown Prince of Fujairah, Director General of the Department of Industry and Economy in Fujairah, Chairman of the Organizing Committee of the championship, Eng. Mohammed Obaid bin Majid.