Mohammed bin Rashid.. an inspiring leader who promoted the concept of first place in sports 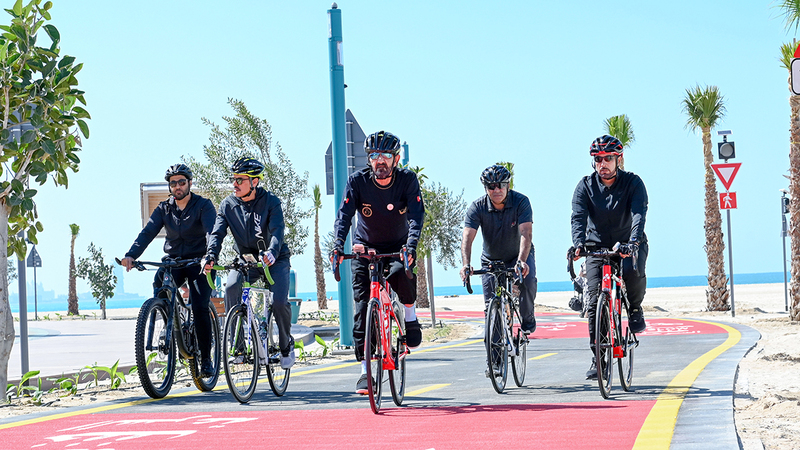 The fourth of January 2006 represents a historic milestone in the march of the Emirate of Dubai and the UAE, as it witnessed His Highness Sheikh Mohammed bin Rashid Al Maktoum, Vice President, Prime Minister and Ruler of Dubai, assuming the reins of government in the Emirate of Dubai and the presidency of the Council of Ministers, after achieving exceptional achievements referred to In Lebanon, in light of the insightful vision of an inspiring leader who achieved a qualitative leap and huge achievements in all development files, and at all cultural, economic, developmental, technological, community and sports levels, and his Highness managed, during 17 years, to make Dubai an icon that the eyes of the whole world aspire to, and millions from all countries contemplate. the world to make their dreams come true.

This occasion is very special, due to the role of His Highness in the path of prosperity and supremacy of the state, as sports and athletes enjoy great support from His Highness, which is what we have come to know from the ruling leader whose pioneering achievements did not stop at this point. Nobility, role model and distinction emanating from the heart of the UAE desert, maker of greats.

Love and passion for traditional sports

The sport of horses is one of the most prominent sports that received the attention of His Highness, as his white hands extended, without limits, to support the sports movement, which resulted in tremendous achievements, which included all activities locally, continentally and globally. “,” And only the first place knows a way, because His Highness is one of the influential, influential and greatly inspiring personalities in the horse industry in the world.

Fares Al Arab grew up and grew up loving horses and equestrianism, which prompted him to support them strongly, contribute his bright ideas to their development, and elevate their status at the local and global levels. Sport had a prominent share of His Highness’s interests as an athlete and knight without dust, and as a leader and teacher for his children, and for other athletes, to whom he gave eloquent lessons in the art of winning and leadership, and in honorable competition with a sportsmanship.

From an early age, His Highness trained to ride horses, as his father, the late Sheikh Rashid bin Saeed Al Maktoum, may God rest his soul, took care of training him and his brothers, and His Highness Sheikh Mohammed bin Rashid Al Maktoum showed outstanding skill, and did a good job, which foreshadowed the future promising. Despite his interest in many sports, most notably tennis and football, equestrianism is still his first love, because this sport is an integral part of his history and being.

And the actual relationship of His Highness with international horse racing began with the filly “Hatta”, which gifted His Highness his first victory in horse racing in 1977, where the victories continued, until His Highness launched the “Godolphin” Foundation in 1994, which achieved global achievements over the years until today.

Support and encouragement for horse owners

And His Highness Sheikh Mohammed bin Rashid Al Maktoum encouraged horse owners in the Arab world to run in international races, after their participation was limited to local races, and he established the Dubai World Cup – the most expensive race in the world – in 1996, and this race has witnessed large participations of horse owners from Most countries of the world, and the Dubai World Cup race continues to attract the interest of horse owners around the globe. Thanks to the achievements made by His Highness in the sport of horse racing, and the great interest that he paid and is still paying for this sport, His Highness was awarded the “Eclipse” prize in the field of horses in 2001. To support sports and athletes, honor the outstanding and support the innovators, the Sports Creativity Award was launched as part of the initiatives of Mohammed bin Rashid Al Maktoum International, in various fields in 2009, in order to support and honor the people of the UAE and various countries, and motivate them to be creative in various fields, as the number of winners until the last edition reached 230 successful sports personalities.

Other sports attracted the interests of His Highness, in support and encouragement as well as practice, including falconry, which he was raised on since he was young. Fazza Falconry Championship. Likewise, he is a lover and follower of football, cycling and many other sports. Camel sport also receives great attention from His Highness, through his constant follow-up of all the details of this heritage sport, as the Dubai Camel Racing Club was established, which represents one of the leading sports institutions in The region, which is concerned with the culture and heritage of purebred Arab camel racing at the local and regional levels, aims to establish an integrated system that works to spread information and knowledge at the global level, and sheds light on the sport and culture of camel racing that is rooted in the past to establish this integrated edifice.

• January 4, the anniversary of Mohammed bin Rashid assuming the reins of power in Dubai.

• 1996 the year in which the Dubai World Cup, the most expensive race in the world, was established.

• 2001, the year in which His Highness was awarded the special “Eclipse” prize in the field of horses.

His Highness Sheikh Mohammed bin Rashid Al Maktoum achieved many international achievements in equestrian sports, including endurance races, as he led the Emirates Endurance Team to achieve great achievements at the level of world championships. The UAE team is among the best teams in the world, and includes the best riders, although the UAE’s participation in international endurance races is relatively recent. One of the most prominent achievements of the UAE team was winning the World Endurance Championship in 1999 and 2000, respectively, as well as in 2002. His Highness led the Emirates team to victory in the European Championship that was held in Spain in 1999, and it was he who regained the championship title for the UAE in 2001 in the race that was held in Italy. He also led the team to victory in the European Championship, which was held in Ireland in 2003.

His Highness’s role did not stop in developing the sport of endurance in the Emirates, and organizing world championships on the land of the Emirates, most notably the Mohammed bin Rashid Endurance Championship, but rather his keenness to raise the level of Arab teams and enhance the role of Arab and international championships in this sport, as his highness was keen to participate personally, His sons are in the Arab and international championships, and the provision of Emirati experience in organizing the Arab countries. He also contributed to the introduction of endurance sport to the Asian Games, and His Highness has been working for a long time to introduce the sport of endurance racing within the Olympic sports.

His Highness is considered one of the most influential international personalities, and he was chosen in 1999 as the most influential figure in British horse racing, ahead of a list that included 50 famous and influential personalities in this field. He is a horse breeder in Britain and Ireland, and he was awarded a prestigious medal by the late British Queen Elizabeth II. His Highness won the Owners’ Championship in Britain 15 times, which is the most telling evidence of his influential role in the races, through the impressive achievements made by his horses in various international tracks. His Highness also received the highest degrees and titles, as the British media honored him in July 2008, represented by Channel 4 of British television, in appreciation of his achievements and his active role in developing horse racing at the global level. His Highness actively contributed to the development and support of international races in general, and in Britain in general. Especially, with the participation of the best breeds and elite horses in their races.