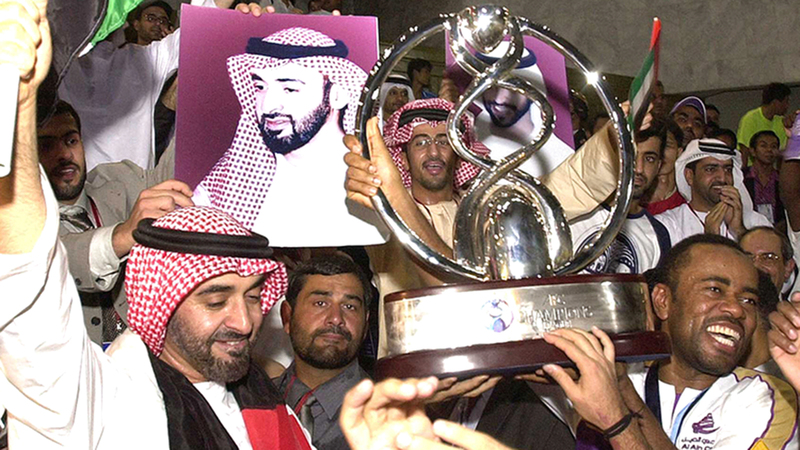 The saying of His Highness Sheikh Mohammed bin Zayed Al Nahyan, President of the State, after the Al Ain team won the AFC Champions League in 2003, established a bright future that awaited the team, which later became among the list of the most successful clubs, locally, Gulf, Arab, Asian and even globally. His Highness’ words still represent the great motivation for the current and former players, who had the honor of wearing the “purple” shirt.

His Highness headed the team’s mission to Thailand to play the second leg of the final match against the Tiro Sasana team, and said in his statement after the “leader” won the title, a statement that is still published on the club’s official website in the “Words of Gold” paragraph: “We are proud of belonging to Al Ain Club, The privacy of Al Ain Club is the most important secret of its local, Gulf and Asian achievements.

The former captain of Al Ain team, Salem Gohar, who lifted the AFC Champions League title in 2003, recounted how His Highness accompanied the team to the historic return match, as an incentive that was not matched by another incentive, noting that this was not strange to His Highness, as he was very close. From the players, and is keen to encourage them to always give their best, and that His Highness’s confidence in the players resulted in the crowning of the continental title.

During his speech to “Emirates Today”, Johar recalled how His Highness’ attendance of the training sessions before the final match had a great impact in encouraging the players, and said: “He was close to us, attended the training sessions, and also gave a motivational speech during his meeting with us before the match, he is a seasoned leader. In the true sense of the word, it was certainly the biggest incentive for us to achieve the Asian Champions title, and to bring it home.”

He indicated that after returning to the Emirates, His Highness visited his sons, the players, in their homes, even without an appointment or arrangement, and that he still remembers that immortal visit that has been engraved in his memory, as His Highness also visited him at his home in Ajman, and said: “This was a tribute to We had an exceptional event, an incident that we will never forget.”

Salem Johar expressed his pride and pride that his picture is present in the commemorative photo of the celebration of the 2003 AFC Champions League next to the picture of His Highness Sheikh Mohammed bin Zayed Al Nahyan, and next to the picture of the late Sheikh Khalifa bin Zayed Al Nahyan, may God have mercy on him, stressing that he is lucky. It is in the memorial photo.

Salem said that His Highness’ attendance of the League Cup final match at the beginning of this month between Al-Ain and Al-Ahly youth was like a feast for the athletes, noting that His Highness is close to the athletes. He stressed that every athlete who enjoys playing a match under the eyes of His Highness finds himself a great incentive, with which he must achieve victory. He said: “It was a great incentive for the players during the League Cup final, as I said, there is no greater incentive than achieving titles under the eyes of His Highness.”

• “There is no greater incentive than achieving titles under the eyes of His Highness.”