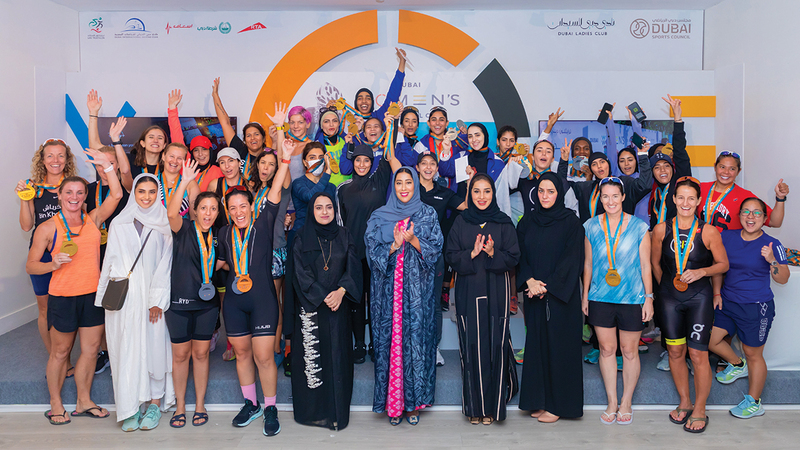 Shamsa Saleh, Executive Director of the Dubai Women’s Establishment, and Fawzia Faridoun, Head of the Women’s Sports Department at the Dubai Sports Council, participated in the coronation ceremony for the first places in all individual categories and teams.

Mona Al Marri said, “We are working under the directives of His Highness Sheikh Mansour bin Zayed Al Nahyan, Deputy Prime Minister and Minister of the Presidential Court, Her Highness Sheikha Manal bint Mohammed bin Rashid Al Maktoum, President of the Dubai Women’s Establishment and President of the Dubai Ladies Club, to raise the level of competitiveness of women in various sectors. And strengthening its presence in sports circles, and achieving gender balance as well in the sports field is one of the goals we seek to achieve.”

She added: “HH Sheikha Manal bint Mohammed’s support for women stems from her Highness’ belief in the ability of women to achieve excellence in this field, and the balance between their social and professional responsibilities and the practice of sports that Dubai has adopted as a way to a healthy life through the events hosted and organized by the emirate throughout the year,” stressing Her happiness that the Dubai Women’s Triathlon has become one of the leading events on the map of women’s sports at the local and international levels. She expressed her appreciation for the wide participation that the “Dubai Women’s Triathlon” attracted from female citizens and residents.

She said: “Women enjoy great care by the wise leadership in various fields, including the sports field, to qualify them to achieve leadership and excellence in various local, regional and international competitions, as well as increase their representation in sports boards, in close cooperation with strategic partners, led by the Dubai Council. athlete.”

Mona Al-Marri invited women to take an interest in sports and participate in sports events and championships, which contributes to the advancement of the level of women’s sports participation in the UAE, in line with the vision and directives of the wise leadership regarding providing all the capabilities and capabilities for women to be able to be creative in sports, and to participate in providing honorable representation. of the state in foreign sports forums.

For his part, the Secretary-General of the Dubai Sports Council, Saeed Hareb, stressed that the vision and support of the wise leadership made the UAE a global model in appreciating and empowering women, until it became a pioneer in its female leaders in various fields, by supporting women’s participation in leadership positions, and enabling them to Performing its role in serving the country and creating the future.

He added: “The Dubai Sports Council is keen to launch initiatives that aim to enhance the role of women in the sports sector, whether at the level of empowerment, development or practice to achieve achievements, by organizing many tournaments, events and programs that contribute to activating the role of Emirati women by actively participating in competitions. and sports tournaments.

He explained: “The Dubai Women’s Triathlon is one of the most important initiatives that the Dubai Sports Council is keen to continue organizing, in cooperation with the Dubai Ladies Club, an event we are proud of for its role in spreading a culture of exercise and motivating women of different nationalities, ages and physical levels to participate in the event, Whether to win and achieve titles or to win the honor of participating in this special event, which further encourages women to practice sports and physical activity on a larger scale.”