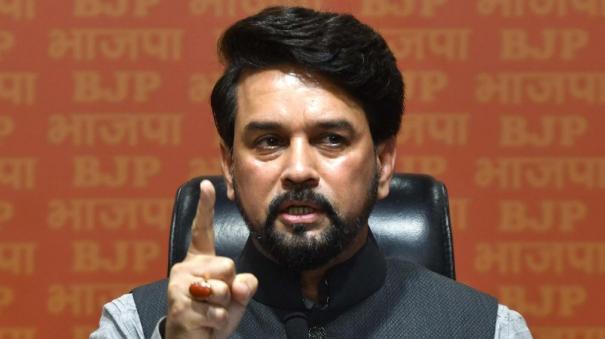 New Delhi: Union Minister Anurag Singh Thakur has praised that India’s economy has grown tremendously in 8 years due to Prime Minister Modi’s policies. He said about this:

In the 75th Amrita Jubilee year of independence from colonial rule, India surpassed Britain to become the world’s 5th largest economy. It gives great satisfaction to every Indian. The achievement comes at a time when Britain is struggling to contain a slumping economy and soaring inflation.

Economists who have been relentlessly critical of the Indian economy are now cringing at the fact that they failed to anticipate Britain’s dire woes.

Bloomberg was the first to report that India has overtaken Britain to become the world’s fifth largest economy. The economy of Britain, once known as Great Britain and now shrinking, was strong. The country firmly held its place in the list of top five economies.

The Bloomberg report underscores how a country that was battered, bruised and bled by British rulers in 1947 under colonial rule has steadily regained lost economic prosperity and influence.

British colonialism in India carried out economic exploitation in this country. India’s share of the world’s GDP, which was 24.4 per cent in 1700 AD, declined to 3 per cent seventy-five years ago, when the tricolor was hoisted on August 15, 1947. Britain advanced while India was further impoverished.

It is necessary to recall this statistic to understand the major policy changes that Prime Minister Narendra Modi has made to record India’s phenomenal growth in the last eight years and put the national economy on a high.

In 2014, Prime Minister Modi set aside the past, redeemed the many disappointments of Indians, unleashed their potential, and ushered in a prosperous future that would take this great nation on the path of development.

These eight years have seen the impact of steady changes brought in by Prime Minister Modi. Gap filling speed increases

India has emerged as the fifth largest economy in terms of GDP growth at 13.5 per cent in the first quarter of FY 2022-23. If the purchasing power increases, India’s GDP will become the world’s third largest economy after the US and China.

India’s value continues to rise while others’ GDP stagnates or declines, according to forecasts. This means that India is expected to maintain its lead and increase the pace of filling the existing gaps.

For two years, the impact of Corona has hit the Indian economy as hard as the global economies. Prime Minister Modi turned these crises into opportunities. His vision prevented India from going the way of others. Instead, he chose a cautious and prudent approach. He worked to target spending on infrastructure projects that create jobs.

The world’s largest free food program, which provides free ration items to nearly two-thirds of India’s population, and the world’s largest corona vaccination program, have helped India’s economy recover quickly from the ravages of the pandemic.

As we enter our 100th year of independence, we will emerge stronger and more prosperous than ever before.

India that feeds the world

Today India is second in terms of number of internet users. Similarly, it has a strong presence in the consumer market. We are now strong participants in global trade.

We have broken our previous export records and touched Rs.50 lakh crore this year. Our exports of goods have crossed Rs.31 lakh crore. A country that once lived at the mercy of others, today is a country that exports food to the world.

The list of success stories of the Modi government is long. Over 100 billion dollar companies are created and new companies are added every month. Consequently, the valuation of unicorn companies created in the last eight years has crossed Rs.12 lakh crore.

Under Prime Minister Modi’s tireless leadership, India’s startups have grown from a few hundred to over 70,000. 50 percent of start-ups are located in second and third tier cities. This success is a result of the Digital India revolution launched by Prime Minister Modi.

In 2014, there were 6.5 crore broadband subscribers in India; Today, it has more than 78 crore subscribers.

The introduction of GST has become more beneficial for entrepreneurs while also fixing gaps in tax collection.

Realizing that a developing India is not limited to glass malls, Prime Minister Modi is also paying serious attention to reducing poverty.

A recent IMF study highlights how consumption inequality has fallen dramatically as a result. Apart from this, there have been significant changes in the social development indices of housing and health for the poor.

From providing subsidized cooking gas to the underprivileged to providing piped drinking water to every rural household, several schemes are being implemented by the central government.

Mudra loan and other related credit schemes have not only created small businesses but also given impetus to employment and self-employment opportunities.

Prime Minister Modi’s ‘Ore Bharat – Unnatha Bharat’ plan is steadily taking shape. It is a vision involving the government and the people – a joint effort. India is self-reliant and ready to meet challenges and overcome adversity.

A journey of faith

Crossing the twin milestones of being the fifth largest economy in the world and the fastest growing economy is undoubtedly a monumental achievement for India and Indians.

From this point we begin our journey towards achieving Prime Minister Modi’s goal of creating a $5 trillion economy.

It can now be confidently said that India will cross this milestone in the next two years as well.