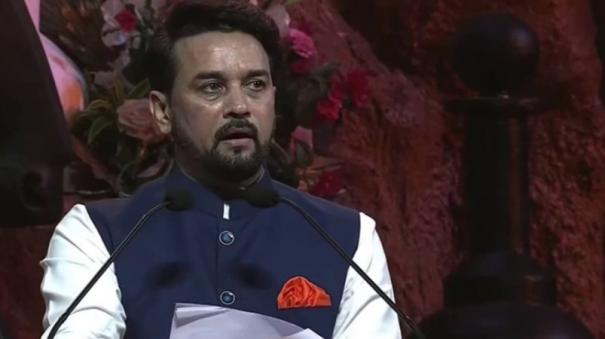 Chennai: The Union Sports Minister said that more than 300 infrastructure projects worth Rs.270 crore are being implemented under the Gallo India project.

This match is a very important moment. It is a historic and proud event. Prime Minister Modi inaugurated the Olympiad torch on 19th of last month to create awareness about Chess Olympiads. The torch has traveled across the country in 75 cities including Tirupati, Thiruvananthapuram, Bhubaneswar and is now being handed over to the Prime Minister after 40 days.

We welcome all players from around the world. Prime Minister Modi is giving huge support to India to perform well in international sports competitions.

Over 15 thousand people have participated in Gallo India, Gallo India Youth Games and Gallo India University Games in the last few months. They have been hugely successful.

Gallo India athletics is important. It makes the country proud. More than 300 infrastructure projects are underway under the Gallo India project at a cost of Rs.270 crore. This is what he said.

L. Murugan, Minister of State for Central Information Broadcasting and Fisheries Department spoke at the function.

Last 2 months ago Prime Minister Modi launched various infrastructure projects for Tamil Nadu at the same place. He has also made the biggest historical achievement in 2 consecutive months. I mean, we are celebrating 75 years of Independence Day.

Modi becomes a historical hero by making Drarubadi Murmu the President of the Republic, something that has not happened in 75 years. Modi, who has been giving us innumerable projects for 8 years, has taken the tradition of Tamil Nadu and the excellence of Tamil language to the whole world.

At the UN, he shouted ‘Yatum Ure Yavaru Kalir’. Mundasu has added pride to Tamil Nadu by setting up a seat for poet Bharathiyar in his own constituency, Varanasi.

Narendra Modi has given the best governance to India as ‘The world that lives in the sky lives in the foot of the king’. Prime Minister Modi and Tamil Nadu Chief Minister Stalin are holding this chess tournament in Tamil Nadu for the first time in India. And we are very proud to hold this chess tournament in Chennai. Prime Minister Modi has brought many honors to Tamils ​​in the field of sports. Thus he spoke.