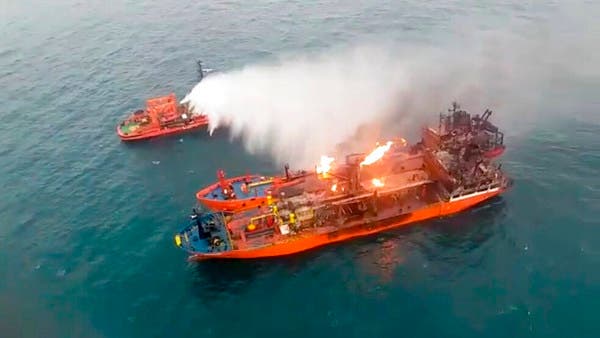 Russia on Monday accused Ukrainian forces of bombing oil platforms in Crimea, which Moscow has controlled since 2014.

The accusation came from the President of Crimea, which is recognized by Russia only, Sergei Aksyonov, who said that Ukrainian forces bombed the drilling platforms of the Black Sea Oil and Gas Company.

He also added on his Telegram channel that five people were rescued, including three injured, while the search for others is underway using ships and planes.

And 12 people are employed in the drilling rigs that were bombed by the Ukrainian bombing, according to Russian news agencies.

Last Wednesday, Russian Foreign Minister Sergei Lavrov confirmed that Moscow was “fully aware” of Kyiv’s threats to strike the Crimean Bridge, which links the Russian mainland to the peninsula.

The commander of the Ukrainian forces, Dmitry Marchenko, had recently said that the Crimean bridge “will be the first target of defeat” after Kyiv receives the weapons promised by the West, adding: “This is not a secret to anyone.”

This comes while the Russian armed forces have continued, since last February 24, to carry out the military operation in the Donbass region, southeast of Ukraine.