Moscow: We are carefully studying Guterres’ proposals on Ukraine 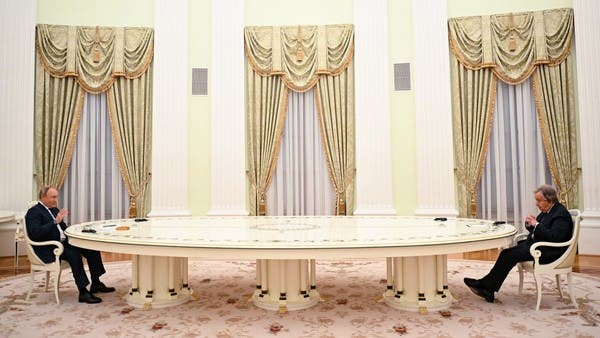 “The Secretary-General of the United Nations has put forward a number of ideas that are now being carefully studied,” Russian Foreign Ministry spokeswoman Maria Zakharova said, according to the Russian “TASS” agency.

She also added that Guterres’ proposals included “the formation of a tripartite group consisting of Russia, the United Nations and Ukraine in order to exchange information and ensure the operation of humanitarian corridors and the provision of humanitarian aid.”

The Secretary-General of the United Nations, who visited Moscow yesterday, urged it to cooperate with the Red Cross in order to evacuate civilians trapped in some Ukrainian cities and regions.

He also called on the Russian authorities to cooperate with the International Criminal on the occurrence of possible war crimes on Ukrainian soil, according to AFP.

Guterres, during his first visit to Ukraine since the start of the Russian military operation on February 24, is expected to also go to Bucha, and later meet with Ukrainian President Volodymyr Zelensky.

While the Ukrainian presidency sharply criticized him, due to the schedule of that visit, which was supposed to start in Kiev, according to Zelensky, who said during one of his video speeches, commenting on the visit of the UN official, “I do not see corpses in the streets of Moscow,” referring to the destruction and death. Which hit the Ukrainian capital, which requires a strong message of support from the United Nations, embodied by visiting it first.