Mosimane: We will beat the teams that compete against us in the league 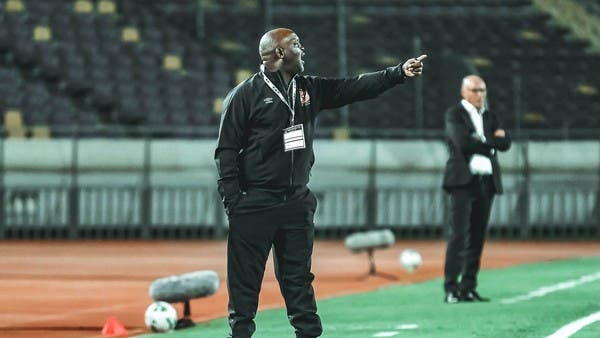 Al-Ahly failed to achieve any victory in the last three matches of the Egyptian Premier League after its hard-fought 1-1 draw with Ceramica Cleopatra with a penalty kick in the 101st minute on Saturday, and coach Pitso Mosimane acknowledged the existence of an offensive problem with the African champions.

After the 1-0 loss to Al-Masry Al-Portsaidi earlier this month, Al-Ahly drew with Tala’a El-Gaish without goals, before drawing with Ceramica, to score one goal in the last three matches in the competition.

Mosimane told reporters after the match: “We have had a problem scoring goals lately and this needs to be corrected.”

The South African coach added: “We didn’t score goals in the last two games, but we created a lot of chances, so there is a problem in ending the chances.”

He continued: In the last two matches, we faced two teams that played with six or seven defenders. I respect that but he lost four points and we have to take that into account and fix the problem.

Al-Ahly is second in the league, five points behind leaders Zamalek and defending champions, but Mosimane has two matches left.

Musimani is not worried, especially that Al-Ahly is doing well in the African Champions League and will face Algeria’s ES Setif in the semi-finals as it seeks to achieve the title for the third time in a row.

He continued: There is nothing to worry about and everyone should have confidence. The league is not over yet, and we will have confrontations with competing teams in the league, and we will strive to win them.