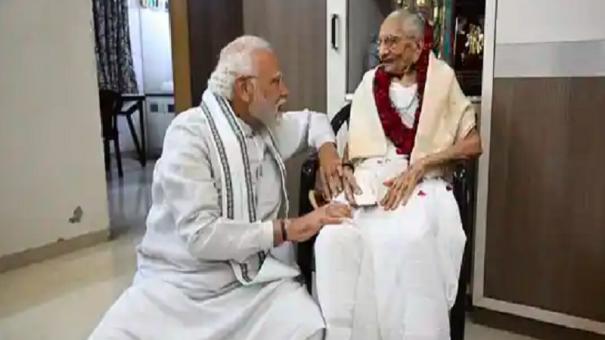 Gandhinagar: On the occasion of his mother’s 100th birthday, Prime Minister Narendra Modi met him in person, performed foot worship for him and blessed him by wearing an evening gown.

Hiraben Modi, mother of Prime Minister Narendra Modi, celebrates his 100th birthday today. He was born on June 18, 1923. On his birthday, Prime Minister Modi visited his home in Gandhinagar, Gujarat. After performing puja with the mother earlier. Then he washed his feet and prayed the path and rubbed the water in his eyes. Later, she wore him an evening gown and shawl.

He posted a video on his Twitter about this. Together he, my mother rubbed the utensil in a lot of houses to cope with household expenses. Will spin the wheel. Cotton will dry. He did all the work to save us from thread spinning to homework. He would clean the house so that the cotton pin would not pierce us even in the midst of painful work. Maybe if my dad had been alive he would have reached the centennial birthday this year as well.

#WATCH | Gujarat: Prime Minister Narendra Modi met his mother Heeraben Modi at her residence in Gandhinagar on her birthday today.

Heeraben Modi is entering the 100th year of her life today. pic.twitter.com/7xoIsKImNN

Hiraben Modi, the mother of Prime Minister Narendra Modi, has arranged a luncheon at the Puri Jagannath Temple on his birthday. Prayer meetings have been arranged in Prime Minister Modi’s hometown of Vatnagar.

After meeting his mother, Prime Minister Modi goes to Bhavnagar, a holy place in Panchamal district. Later Gujarat Kaurav Abhiyan attends the event. At the event in Vadodara, he is laying the foundation stone for 18 railway projects worth Rs 16,369 crore. He is laying the foundation stone for a new building for the National Rail Transport Center. The building is being constructed at an estimated cost of Rs 5,620 crore.