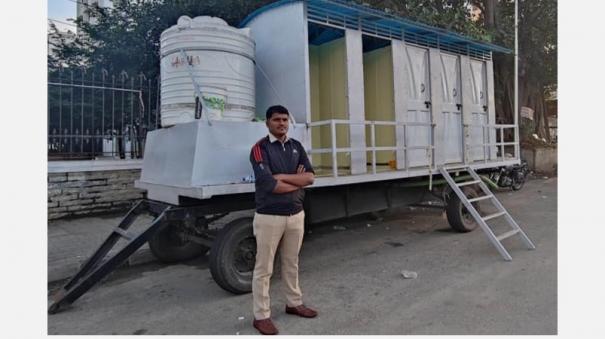 Bangalore: Chandappa Jademmana, who is working as an Assistant Inspector in the Karnataka Police, has provided a mobile toilet facility following the embarrassment faced by his mother. His effort has attracted attention from many walks of life.

Bangalore, the capital of the state of Karnataka is known as the Silicon Valley of India. The most important junction in the city is called Koragundepalaiya. Thousands of people visit this area daily. There seems to be no proper toilet facility there though. It affects most people. Women in particular are most affected by this. Now Chandappa has come up with a solution.

He is working as an Assistant Inspector at Vidhan Sabha Police Station. He has set up this mobile toilet for use by men, women and third genders. He himself explains why.

“One day I was going abroad with my mother from Gorakhpur. Then my mother told me to use the toilet. But there was no toilet. I could not tell my mother about it. It was very embarrassing for me too.

I thought no one should face what my mother faced. I wanted to bring it to the notice of the Bangalore Corporation officials. The effort I made was to no avail. I kept doing it though.

My attempt reached 100 days. I have set up a mobile toilet in the same place to refer to it. I set it up at my own expense and with the help of some good people. “

He has hired a person to clean the toilet. It is noteworthy that this toilet was opened by a third sex person.